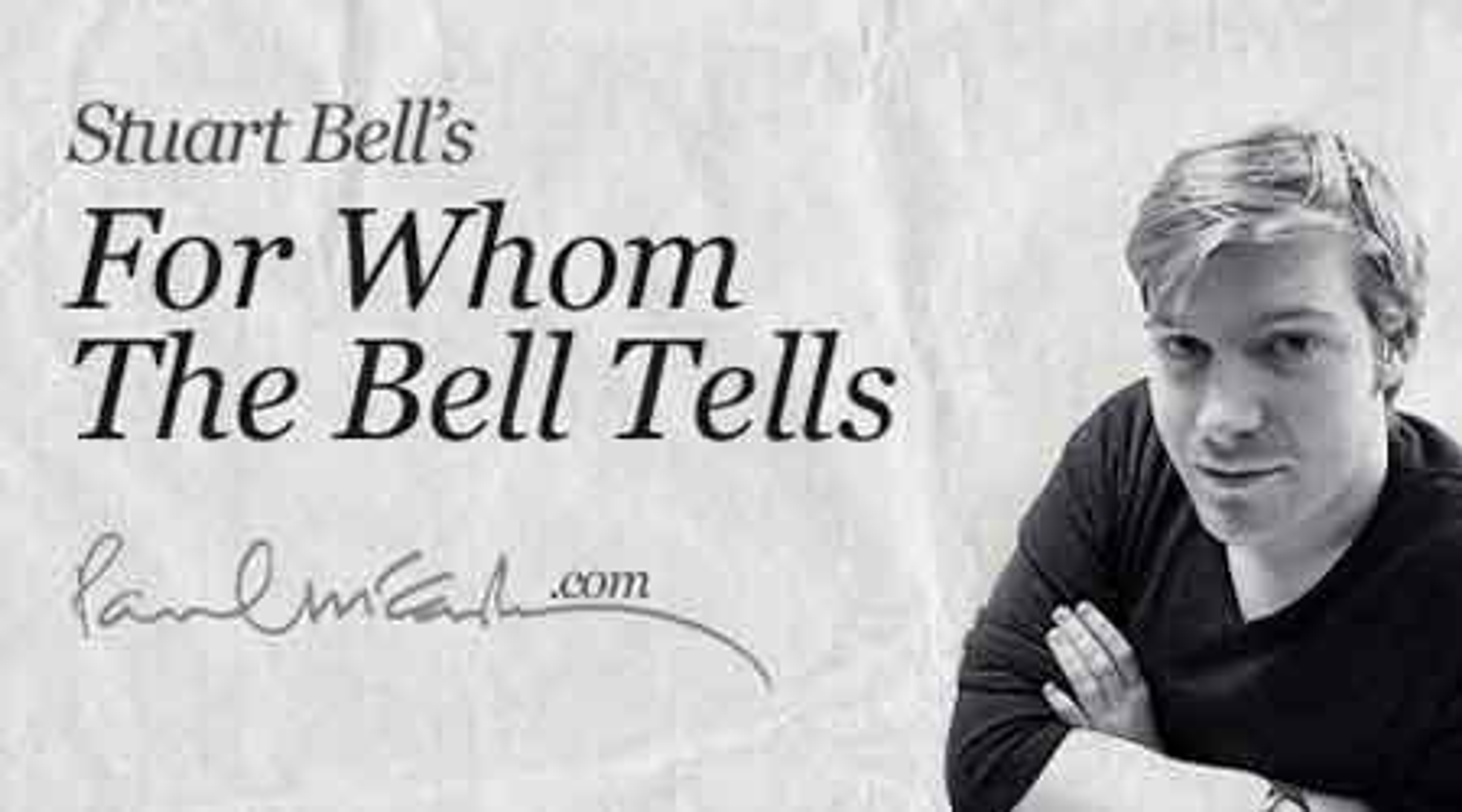 This month has been epic. Paul has packed more into December than most artists manage in a year. Even as I write this, every spare inch of my desk is covered in international press cuttings from the last four weeks. It seems like there's barely a newspaper or website around the world that hasn't written about Paul over the last month. Hard to believe that at the start of December, I was looking back over our 2009 schedule fondly remembering the Good Evening Europe tour, the trip to the EU, rocking The X Factor and the now legendary O2 extravaganza that brought the year to a close. How could Paul beat that, I wondered. Well of course he did, as only Paul could.

Where to begin? How about calling in on the most powerful man on the planet in one of the most famous houses in the world? Again! Unbelievably, Paul's first appointment this month was at the White House, which is becoming something of a common feature in this column. Even the President joked that Paul is becoming something of a regular there. This time, he was awarded a Kennedy Centre Honour, which recognises exceptional talent in the arts but also the ability to bring people together. On the night, Paul received his award alongside fellow honourees Oprah Winfrey, country legend Merle Haggard, Broadway lyricist and composer Jerry Herman and avant-garde choreographer Bill T. Jones, while Macca's achievements were celebrated by Steven Tyler, Norah Jones, Dave Grohl and Gwen Stefani with No Doubt who all performed Beatles songs. Not a line up anyone will forget in a hurry!

From there, Paul headed to New York to perform on the legendary 'Saturday Night Live', helping to make the episode the highest rating since the season began no less! With 7.6 million viewers overall, the NBC show outscored every Saturday non-sports primetime show on every major English language network since March 2008. Phew!The show saw Paul on top form too, with him impersonating Camilla Parker Bowles, playing a tiny harmonica and, of course, performing five songs including Wings songs 'Jet' and 'Band On The Run', Beatles classics 'A Day In The Life' and 'Get Back' and John Lennon's 'Give Peace A Chance' to mark the 30th anniversary of Lennon's death. Paul paid tribute to his former bandmate earlier in the week too when he appeared on 'Late Night With Jimmy Fallon' and performed the beautiful 'Here Today'. He also showed some typical Paul humour by duetting with the show's host on a hilarious version of 'Scrambled Eggs'. You may know the tune better these days as 'Yesterday' - the most covered song of all time - but when Paul was writing the legendary track, he used the words 'scrambled eggs' as lyrics while he worked on it. Luckily, he found time to change the words before the rest of the world heard it and the rest, of course, is musical history...!

Speaking of which, history was made all over again just last week when Paul followed the 'Saturday Night Live' appearance with an incredible show at the famous Harlem Apollo. The 1400-strong audience included celebrities such as Jerry Seinfeld, Alec Baldwin, Martha Stewart, Tony Bennett, Ben Stiller, Kevin Bacon, David Byrne, John McEnroe, Steven Van Zandt, Jann Wenner, Lorne Michaels, Keith Richards, and Ronnie Wood all of whom were joined by millions of radio listeners as the set was broadcast live for Sirius XM Radio subscribers. Without the lights and video screens of a stadium show, the focus was all on the music and Paul played an unforgettable show that wowed the lucky critics in attendance. Associated Press noted that in a trim black suit with white shirt and hair still black and in a modified moptop, McCartney looked almost unnervingly like he did decades ago, especially when he held his Hofner bass‚ while Entertainment Weekly declared that with a full set plus two encores, there were too many stand outs to list.‚Äù We certainly won't forget it in a hurry!

Paul was only just getting started though. Within days of the Apollo show, he was back on home turf in London for the most intimate show of his solo career at The 100 Club to show support for the venue that is currently threatened by closure. Upon announcement tickets were snapped up immediately. Our office had never been so popular! We had newspaper editors, TV and radio presenters, bands, head's of record labels begging us for tickets.

On the evening of Thursday 16th Paul and the band spent the night rehearing in the tiny venue which was an amazing experience. I had to pinch myself. A personal rehearsal highlight for me was 'Let Me Roll It' complete with Paul's extended harmonica solo.

On Friday morning in freezing cold weather conditions just 300 fans squeezed into the tiny basement to see the show of a lifetime Paul admitted it was such a personal show, it was like having dinner with the audience! The lunchtime show performed just an hour after Paul had got out of bed! featured some of Paul's greatest songs, from 'Let It Be' and 'Hey Jude' to 'Blackbird' and 'Let Me Roll It' and drew rave reviews and news stories across the globe, as far a field as China. Closer to home, The Times called it a very special concert and the Daily Star said it was like Christmas had come early.

Despite more heavy snow in the capital, Paul's fans were out in force the following night too as Macca took to the stage at London's Hammersmith Apollo for the first time since Wings played there 35 years ago. In what turned out to be the venue's fastest ever selling show, it was a real treat to see Paul playing such an intimate gig when we're all so used to seeing him sell out stadiums and wow enormous festivals. Rocking out in the crowd was Steve Coogan, Rob Brydon, Paul Weller, Frank Skinner, Chris Moyles, Sharleen Spiteri, Marina and the Diamonds, Sir Peter Blake, Twiggy and Mirror newspaper editor Richard Wallace. It was obviously a special moment for Paul himself too, as he looked round on stage and told the audience There are so many memories here. I'm just going to take a moment to take it all in.After another truly amazing show, one reviewer for The Express summed it all up better than I can, saying after over 50 years in the music business, he has an instinctive rapport, making us laugh, dance and even cry in equal measure.

Following an incredible few weeks, there was obviously only one place Paul could go next; one city where he could bring the last unbelievable year to a fitting conclusion. Liverpool of course! For his last gig of the year, Macca returned to his hometown on Monday for his final intimate show... and what a show it was! The gig at Liverpool's O2 Academy was the fastest ever selling show at the venue and fans who snapped up a ticket got an early Christmas present as Paul raced through nearly 30 of his greatest hits for the delighted audience, with the Liverpool Echo later saying If Sir Paul should take anything from tonight's gig, it's that his city loves him as much now as it ever did, and he undoubtedly feels the same.

There was some drama before the show when the band missed their train up to Liverpool due to the weather inflicted travel chaos, fortunately though they were able to get up there in time! At the same time Paul was taking a drive around his hometown, showing his family some of his old haunts.

After the show, to celebrate the momentous occasion in fact, some lucky concert goers were sent on their way with an extra special surprise as Paul handed out some chips and hot drinks for fans waiting in the freezing cold just to get a glimpse of their revered idol. How's that for a night to remember?!

We reckon after such a jam-packed December, Paul has certainly earned his Christmas break now. Although if we know our boss, he won't rest for long before he's back on the road in 2011. Who knows what it will bring after all the surprises of this year? I'll do my best to keep you updated whatever happens. Until then, though, everyone in the Macca camp wishes you a very merry Christmas and a happy New Year. Hope it's a great one!