For Whom The Bell Tells…remembers Glastonbury 2004 (Issue 27) 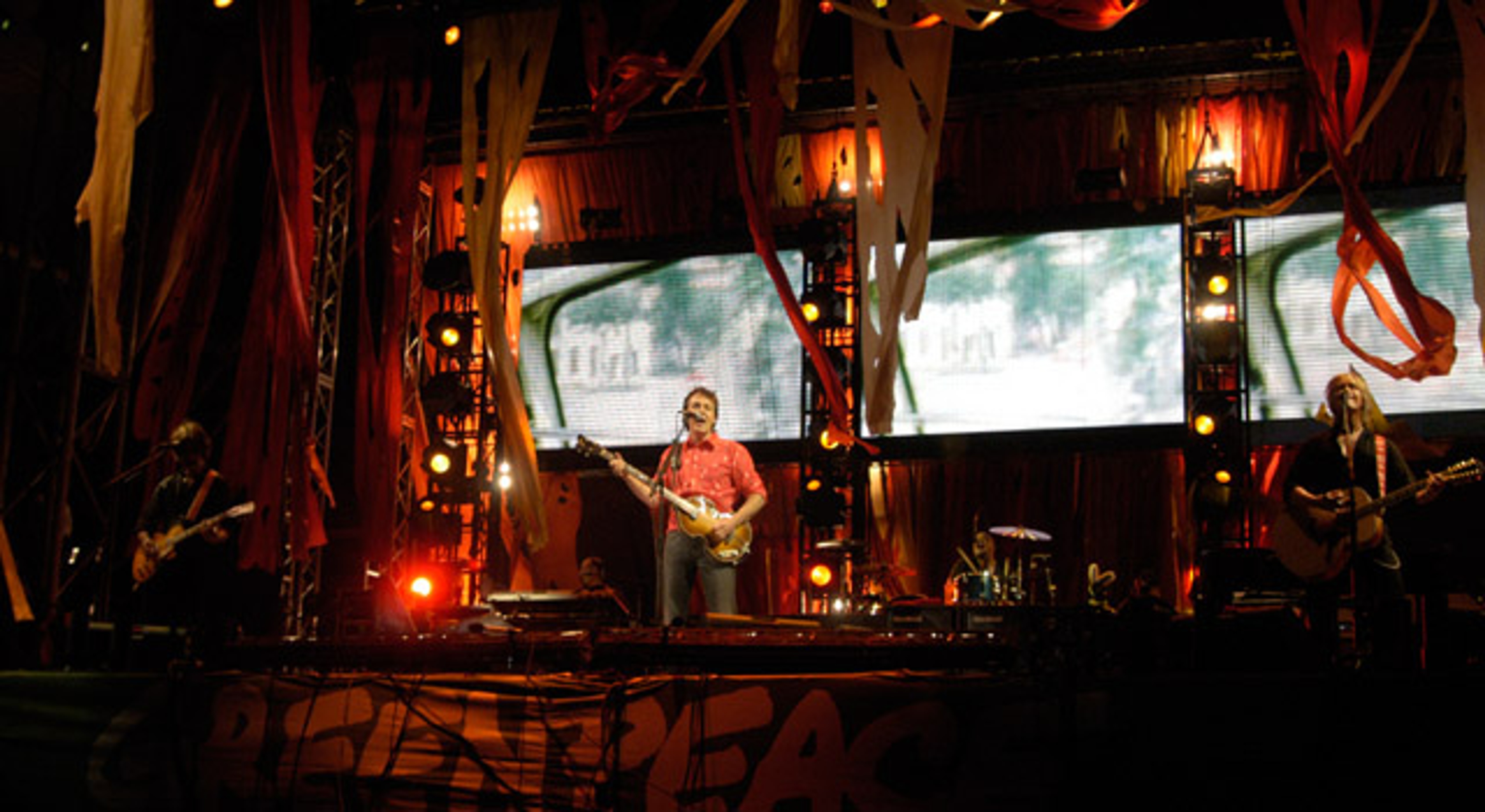 For Whom The Bell Tells… remembers Glastonbury 2004

“Spare a thought for Michael Eavis.  He could live to host a hundred more Glastos and he’d never top this. And pity us poor punters, oblivious to the fact we are sinking in mud and soaked to the skin, because every gig we go to from now will fall short of this.” NME, 3rd July 2004

As I watched this year’s Glastonbury Festival from the comfort of my sofa it got me thinking about Paul’s performance there in 2004.  I can’t believe ten years has passed.  For me personally Paul’s Glastonbury appearance will remain an absolute career high, as it was the first UK show that I was privileged to be part of the team on and it’s a performance that comes up in conversation on a regular basis with writers, friends and people in the industry.  It really was one of those nights that created a legendary moment in the festival’s special history.

For Paul too it was undoubtedly a very special moment, unbelievably his first festival performance.  I remember talking with him after the show and not knowing him very well at the time I was struck by his genuine enthusiasm and excitement about the day. Here was a guy, I thought, who wrote the rock rule book and has done everything but is still completely turned on by what he does. I remember asking him about how he’d prepared for this particular gig and he replied by saying he’d been preparing all his life for it – the results and reviews backed this up. Paul had broken box office records, set the world record for highest concert attendance, performed all over the world but still took nothing for granted about this particular engagement. The Guardian reported Paul’s show as "an all-encompassing sing-along with the sense that the audience were part of a genuine event rather than mere spectators."

There had been rumours for years that Paul would headline Glastonbury, it was said that Michael Eavis had been after Paul for decades.  So when Paul was finally announced as the 2004 Saturday headliner it actually felt like a surprise. Finally one of the longest courtships in music was to be consummated.

A few months later, speaking about the decision Paul said, “I’d had my eye on playing Glastonbury forever, because it’s an iconic festival, and if you play music that’s something you’ve got to look at. You think, ‘Oh it would be great to do Glastonbury!’ So many of my friends and so many people I know make the pilgrimage. But I’d been a little bit put off. I thought maybe it’s not my scene. What happened was somebody had been there one year, a couple of guys I knew, and I was like, 'How was it?' And they were saying, 'Oh great, it’s cool, a great festival'. They said, 'We were coming back at midnight from watching…' whoever it was, it was a few years ago, I think it might have been Radiohead, 'and all the people were sitting around their campfires singing Beatles songs.' I went – ding! A little lightbulb went off. I said, 'Well, I can do that!' So I just thought, 'It’s okay. I should do it.’ So I was up and running with my band - we were touring; we’d done Russia and a few places like that, so we were all fired up. I got the offer to do it. Michael Eavis said, 'Do you want to do it this year?' I said, 'Yeah, go on!' And it was great, man, really cool.”

On the day itself it had been raining hard with little sign of stopping.  The adverse weather also meant that Paul’s arrival on site got held up too, which he confided afterwards helped with the nerves as it didn’t give him much time to think about the show before getting on stage.

The conditions were tough even for the most ardent festival-goer.  Just a couple of nights before Portugal had knocked England out of the Euro 2004 tournament on penalties. The disappointment had spread through Worthy Farm too. Tired, muddy and wet, this wasn’t necessarily going to be an easy show for any artist. As the NME reported, “After the Portugal fiasco, the dirty cloudbursts and a diffident Friday, Glasto 04 needed a big communal hug and a beaming smile.  Enter Macca.”

I remember sneaking a peek at the audience from the side of the stage minutes before Paul started.  It was an overwhelming sight to behold, I’ll never forget it, people as far as the eye could see. I’d never seen anything like this in my life before and didn’t expect to see it again but working with Paul for the last ten years has meant that I’ve seen crowds like this now on multiple occasions and it is still jaw dropping.  Glastonbury was different though. The flags, the banners, the setting, the weather… a sight Paul later described as "like the Battle of Agincourt".

“It was going to take something special after a Glastonbury day when the rain and grey skies had persisted for more than a dozen hours and every highway and byway had turned to a sticky brown adhesive.  But special is what Sir Paul provided, in a performance that lifted the great festival from a wet Saturday evening and took it far beyond the height that Oasis had provided the night before.  This was going to be a historical Glastonbury moment.”
Independent On Sunday – 27th June 2004

“The rock icon walked on stage to the loudest cheer of the festival and immediately launched into a string of familiar hits, ‘Good evening Glastonbury – it’s great to be here finally,’ he told the crowd. He may have been older than the average attendant but he showed in style that his appeal continues to bridge generations.  The audience made up of old faithfuls, young converts sung along to many of the songs creating a warm atmosphere after a day of terrible weather.”
The Observer – 27th June 2004

As has become something of a phenomena with McCartney outdoor shows the rain stopped shortly after Paul took to the stage.  The festival mood and spirit lifted higher and higher with each song performed. Along with Paul’s crew and 120,000 plus festival-goers I watched totally spellbound at the side of the stage.

“When he follows 'Eleanor Rigby' with 'Drive My Car' and then follows that with 'Penny Lane' and that with 'Get Back' and that with 'Band On The Run' and that with 'Back In The USSR' and – f*ck me! - that with 'Live And Let Die' (embellished with crowd lifting firework display), we are all aware that not only are we witnessing the greatest sequence of songs ever played in the fields of Avalon, but we are partaking in a little bit of history.  This is a member of the greatest band in the world ever playing some of the greatest songs in the world ever.  And it don't get better than that. Even those of whose Glastos number in double figures have never seen, heard or felt the love like this crowd on this night, as we are taking 'Hey Jude' from Macca and baying it the darkness heavens.  It's one of those moments that everybody here will remember forever.”
NME, 3rd July 2004

“Paul McCartney put his younger rivals in the shade with a blazing set before 120,000 fans at Glastonbury.  Paul McCartney headlined the mud-soaked festival with a stunning two-hour performance on the main stage on Saturday night.”
Daily Record, 28th June 2004

After the show we had drinks backstage with Paul to celebrate the evening which also marked the end of the 04 Summer Tour, which saw Paul play 14 huge outdoor shows across Europe. Needless to say spirits were high and all you could hear was the crowd still singing the famous '"Hey Jude"  chant over and over again – literally for hours.  I remember excitedly calling journalists and saying listen to this whilst holding my phone aloft.

Even when our tour bus rolled off site just before 5am the “Hey Jude” chant was still going strong!

Speaking afterwards Michael Eavis said, “Paul won the day for me. He put so much into it. He hugged and kissed me afterwards but I should have kissed him. McCartney was the strongest act by far.”

The following year, in 2005, Paul and Michael were reunited when Paul picked up an NME Award for 2004s Music Event of the Year for his Glastonbury performance.

Years later in an interview with monthly music magazine Clash, their editor Simon asked Paul about his Glastonbury preparation:

"You had grown men in tears – in a good way, of course! People still name it as their best ever festival moment. Had you planned anything special or did you know that the songs themselves would make it?" Paul said, "We were just gonna do a Glastonbury set. It was slightly shorter a set than we would normally do. We just chose the songs we thought might work. And then just went and enjoyed it. That was one of the things, it was like, 'Whatever we do, we’re not gonna get uptight. This is Glastonbury. We’re gonna get in with the vibe.' It was a good night for us though, it was a blast, and the audience seemed to love it. It was like, ‘Yeah man! People have come together!’ Very uplifting."

Since Glastonbury Paul has gone on to perform at a number of festivals.  2009 saw his US first at Coachella. 2010 took him to the Isle of Wight festival and last year his 'Out There'tour saw him play at the Bonnaroo Festival (Rolling Stone - “the single greatest Bonnaroo headlining performance in the festival’s history”) and Outside Lands in San Francisco.

This past weekend Paul kicked off the U.S. leg of his 'Out There' tour with plenty more memories to be made in the process.

For Whom The Bell Tells...Issue 26

For Whom The Bell Tells… Issue 25

For Whom The Bell Tells… Issue 24