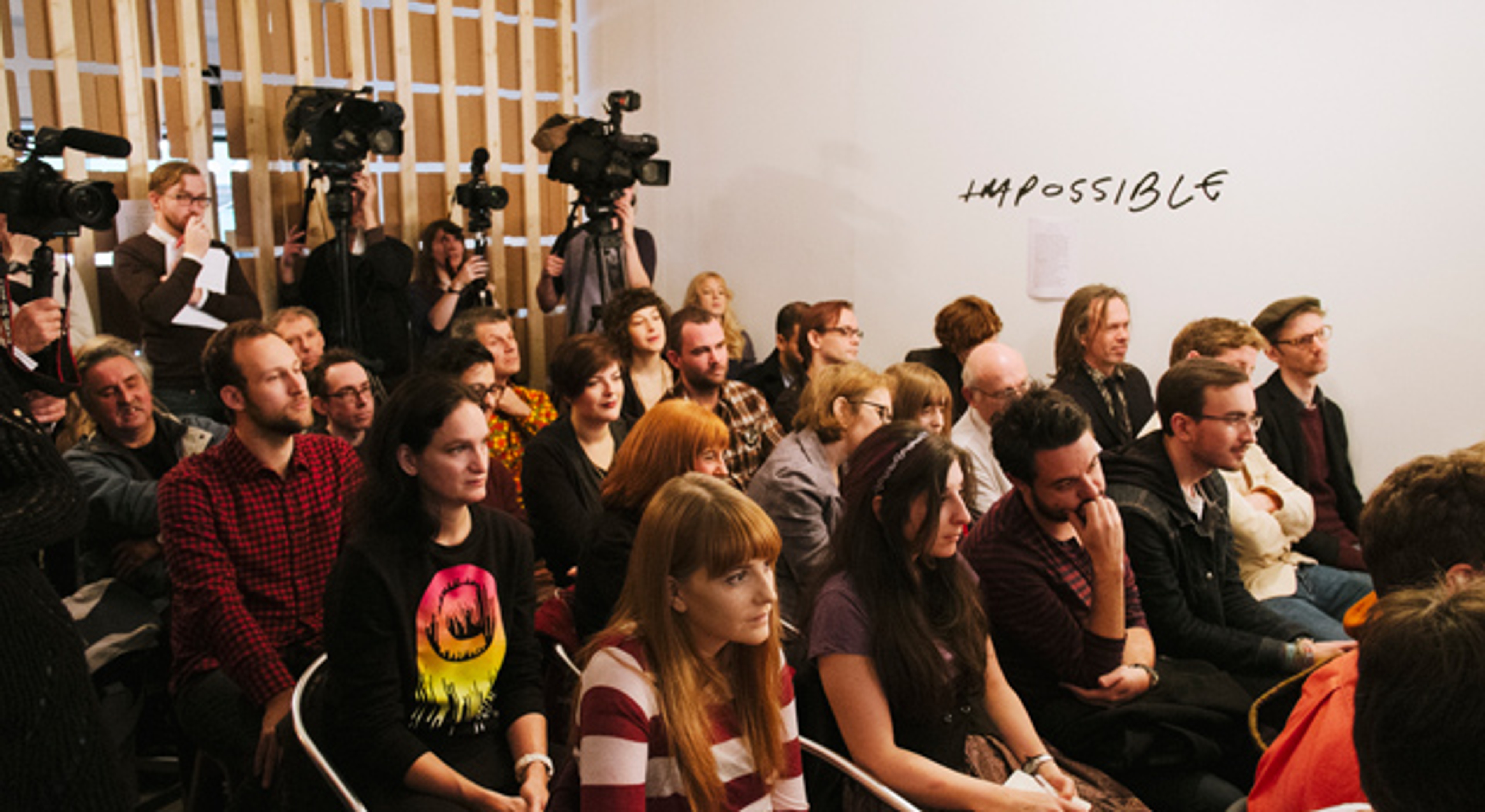 It was impossible (see what we did there!) for Paul to answer everybody's questions at his Impossible.com songwriting talk with Lily Cole.

Fortunately, PaulMcCartney.com was on hand to record four more questions after Paul left, which he kindly answered for us later that day. Check them out below (sorry about the quality of the audio!)...

And remember to read the full transcript from Paul's talk HERE!

"Hi Paul, I was wondering if you were interested in how the Foo Fighters recorded their new album in eight different cities across America? What affect does the location of a recording of an album have on you as a songwriter? For example, when you recorded 'Band on the Run' in Nigeria, how did that influence the songs on that album?"

Paul: "Yeah, I think there is a small affect. But generally it’s more of an atmosphere thing for me. Some people will go to Memphis and do a blues album. For me, I went to Nigeria loving the Nigerian rhythms, and that kind of crept into ‘Band on the Run’ a little bit. A couple of the tracks have got the sort of [sings ‘Ho! Hey Ho!’ from ‘Mrs Vandebilt’]. You know, that’s in there, and it’s a little bit African.

"But I’d arrived there basically with the album written. So in the arrangements, it didn’t affect the songs at all. But in the atmosphere, it does a bit.

"I think if I was writing songs in the place that would probably affect it. But actually in my case I think it’s quite small."

"How do you feel about students now studying popular music with a focus on The Beatles?" (Asked by student studying for an MA in Popular Music in Liverpool.)

Paul: "For me it’s ridiculous, and yet very flattering. Ridiculous because we never studied anything, we just loved our popular music: Elvis, Chuck Berry, Little Richard, Fats Domino, etc. And it wasn’t a case of ‘studying’ it. I think for us, we’d have felt it would have ruined it to study it. We wanted to make our own minds up just by listening to it. So our study was listening. But to be told - as I was years ago now - that The Beatles were in my kid’s history books? That was like ‘What?! Unbelievable, man!’ Can you imagine when we were at school, finding yourself in a history book?!

"So it’s very flattering, and I think it’s a kind of cool idea really, you know, like in LIPA. So yeah, it’s very flattering. At the same time, I don’t think that by studying popular music you can become a great popular musician; it may be that you use it to teach other people about the history, that’s all valuable. But to think that you can go to a college and come out like Bob Dylan? Someone like Bob Dylan, you can’t make. It was an early decision when we were thinking of our policies for LIPA, we said: ‘We want to train people to be all rounders. Give them as much info as we can. But you can’t tell them how to become a Bob Dylan or a John Lennon, because you know, nobody knows how that happens’."

"How do you jot down ideas for songs when you don’t have an instrument, and how do you keep hold of them in your head before going into the studio?"

Paul: "I use a little cassette recorder, which is very old fashioned but it works for me. It’s like a Dictaphone that people would use, like to remember a speech or something. I will just go to the piano very quickly and sort of write a sketch. The trouble with that is you write too many sketches! I’ve got a lot of songs I need to finish!

"The good thing about it is that you didn’t really make a proper recording. Because what can become a problem is if you’ve got a really good sounding demo, you go into the studio to make the record and you can never get the feel of the demo. It’s like, ‘Arrghhhhhh!’ I make bad quality demos so that my record has to be better quality. So I can never say, ‘We can use the demo’."

PaulMcCartney.com: "Do you have the instrumentation and arrangements in mind before you go into the studio? Or do you experiment when you’re recording and go with what works best?"
Paul: "Yeah, often you have a pretty good idea of how you want it to sound and then you make the rest up in the studio. That’s how you record, you know. If it’s just me doing all the parts, then I really kind of make it up, but based on an idea of how I wanted it to sound. When you’ve written a song, you sort of think, ‘This should be a guitar, drums should be doing this’. It’s a bit of a combination of both."

"How do you feel the music industry has changed over the years, and has it changed for the better or worse?" (From a student studying Music Management in London)

Paul: "Hmmm, a loaded question! I think it wasn’t as much of an ‘industry’ then. Now it is very much an industrial pursuit. Then it was just a sort of gang of groups that all happened to know each other and play and it was a sort of a more casual scene. Then they started calling it the ‘music business’, but we kind of ignored that word, we didn’t take the word ‘business’ too seriously.

"But then as it went on and we got more popular and you realised that there was a lot of money involved, ‘business’ and ‘industry’ became how people referred to it. So yeah, it’s just got more serious.

"I don’t really think it’s got any better. We would record four tracks in a day - which is unheard of now - and those four tracks still sell more than most contemporary records, so obviously the system was pretty good. It was very simple, you had to just be very disciplined. We knew when Ringo and I - bass and drums - were going to be reduced to one track that we could never get out of, it was set in, we knew we had to play great. There was no going back because they would wipe the two constituent tracks and then record over it when you were doing this bouncing down thing. But it was very disciplined; you just knew you had to get it right.

"There’s a funny story where I once said to George Martin: ‘George Martin, well in your day how did it happen?’ He said, ‘Well, we’d have the whole band’ - and his was more like a dance band - ‘in the studio, ready to go’. He said, ‘And the telephone would ring' [impersonates ring-ring of telephone] 'and he said, ‘Hello, yes?’ - in his impeccable George Martin accent. They’d say, ‘We’re placing the needle on the record NOW, Mr. Martin!’ He said, ‘Thank you very much’, hangs up the phone, ‘1,2,3,4…’ And they did the take! That was it! I said, ‘Oh my god! What happened if someone got it wrong?’ He said, ‘They didn’t’. And that was the discipline. Everyone knew there was no going back, whereas now you know you go, ‘Oh, we can get it. We’ll do another take or we’ll get it in the mix, we’ll just take that bum note out, we’ll stick it on Pro-Tools, we’ll fix it.’ But it gives you, I think, too many options. It’s great, it’s very luxurious, but I don’t think it helps the process."

PaulMcCartney.com: "Do you think having that focus and discipline - because you only have a short moment of time – is better than having countless tracks and days or even weeks to record?"

Paul: "Yeah, much better. You would go in, start recording at 10.30am and by 1.30pm you were expected to have finished two songs completely. So you know, there’d be two songs each morning, lunch break, two songs in the afternoon. Very productive. And it was great, it was very exciting because nowadays… I’ve just done some mixing, and a lot of it is just sitting, waiting for the computer to digest the data. You know, the little line filling up. And you watch it! I always try and do something [laughs]… But you watch it like it’s important! Loading slowly. Like yeah, do something! And it makes me remember, ‘God, it was so exciting!’ Just [shouts] ‘Do it! Do it!’ And you moved real quick and you got great results that are still played. And some of them sound very contemporary still. But they were done [clicks fingers] in a flash, which made it exciting, productive and intense! But that’s what you wanted. That’s what you were in it for, it was great!"