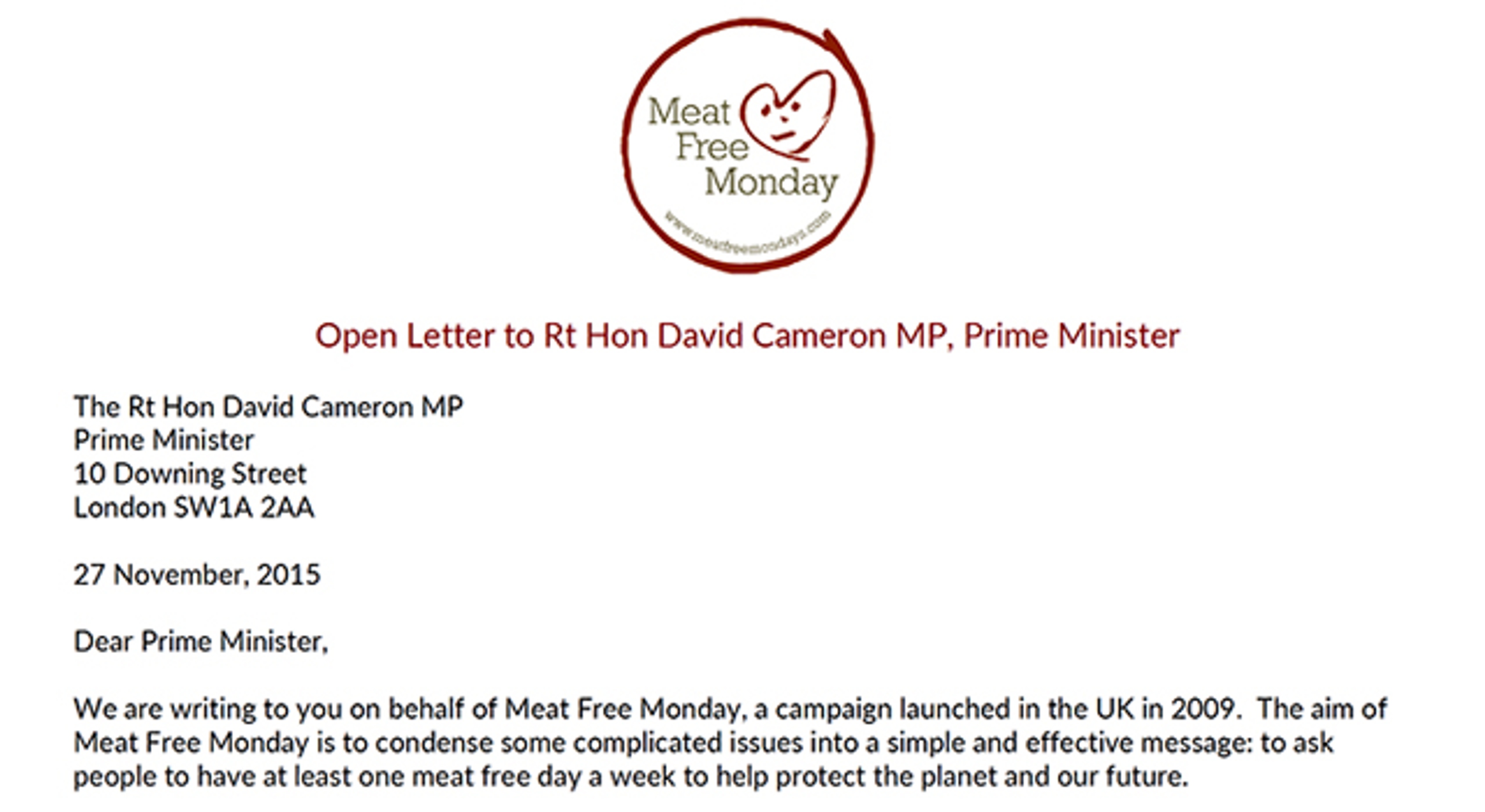 McCARTNEY FAMILY CALL ON PRIME MINISTER TO TAKE MEAT REDUCTION ON BOARD AT COP21
Paul, Mary and Stella McCartney Write to David Cameron

London – As world leaders prepare to head to the climate conference (COP21) in Paris, Paul, Mary and Stella McCartney have written to David Cameron urging him to include meat reduction in the new global climate agreement.

In their open letter to the Prime Minister on behalf of the Meat Free Monday campaign, the McCartney family highlight how intensive meat production is a major contributor towards global environmental devastation and climate change.

The family have been promoting Meat Free Monday since 2009: The campaign encourages people to reduce their environmental footprint and improve their health by having at least one meat free day each week.  With increasing evidence of the negative environmental impact of the global meat industry, they say that, “meat reduction is now more important than ever”.

According to new research from the Center for a Livable Future at Johns Hopkins University, UN member countries can reduce their carbon emissions by up to 2% per year by going meat free one day a week.

The McCartney family also point out that their proposals can be implemented quickly and would have almost immediate environmental and health benefits.

In a video message released today alongside the letter, Paul McCartney encourages people to take up the idea. “Talk to your people, talk to the schools, talk to your friends, talk to anyone you need to talk to and encourage this idea,” he said. “If enough of us do it, it could really make a big difference."

For more information about the campaign, and for details about how to join Meat Free Monday at the People’s March for Climate in central London this Sunday, please visit meatfreemondays.com.

We are writing to you on behalf of Meat Free Monday, a campaign launched in the UK in 2009. The aim of Meat Free Monday is to condense some complicated issues into a simple and effective message: to ask people to have at least one meat free day a week to help protect the planet and our future._

_Massive meat production creates harmful greenhouse gases and depletes precious resources, including land, water and energy, to increasingly unsustainable levels. It is a major contributor towards global environmental degradation and climate change and is also a major factor in loss of species and biodiversity – if present trends continue, over the next 100 years there will be a global mass extinction of species. With increasing evidence of the growth of the global meat industry having alarming environmental consequences, meat reduction is now more important than ever.

Next week you and other world leaders will meet in Paris for the COP21 to try and reach an ambitious global climate deal that keeps global warming well below 2 degrees. A simple but significant environmental action that the UK and other countries can take, with the added benefit of improved health, would be to endorse Meat Free Monday.

Reducing demand for meat, even by a relatively small amount, would have a significant impact on greenhouse gas emissions. In fact, according to new research by the Center for a Livable Future at Johns Hopkins University, UN member countries can reduce their carbon emissions up to 2% per year by implementing Meat Free Monday.

There are a number of simple ways to encourage meat reduction, many of which have already been adopted in different countries around the world:

The proposals we are making can be implemented quickly and would have almost immediate environmental – and health – benefits.

We strongly urge you to include Meat Free Monday initiatives in the UK climate action plan for Paris. One day a week can make a world of difference.

_Hello there. Paul McCartney speaking … to you.

If you heard that meat production was one of the biggest contributors to greenhouse gases in our atmosphere, what would you do? Would you just ignore that fact, or would you want to do something and want to find a solution?

Well, we encourage people at Meat Free Monday to not eat meat on a Monday – or any other day of the week – just one day makes a real difference!

The idea has been taken up by schools, universities, governments – all around the world – and they’re enjoying it! People are enjoying it and it is going to make a big, big difference.