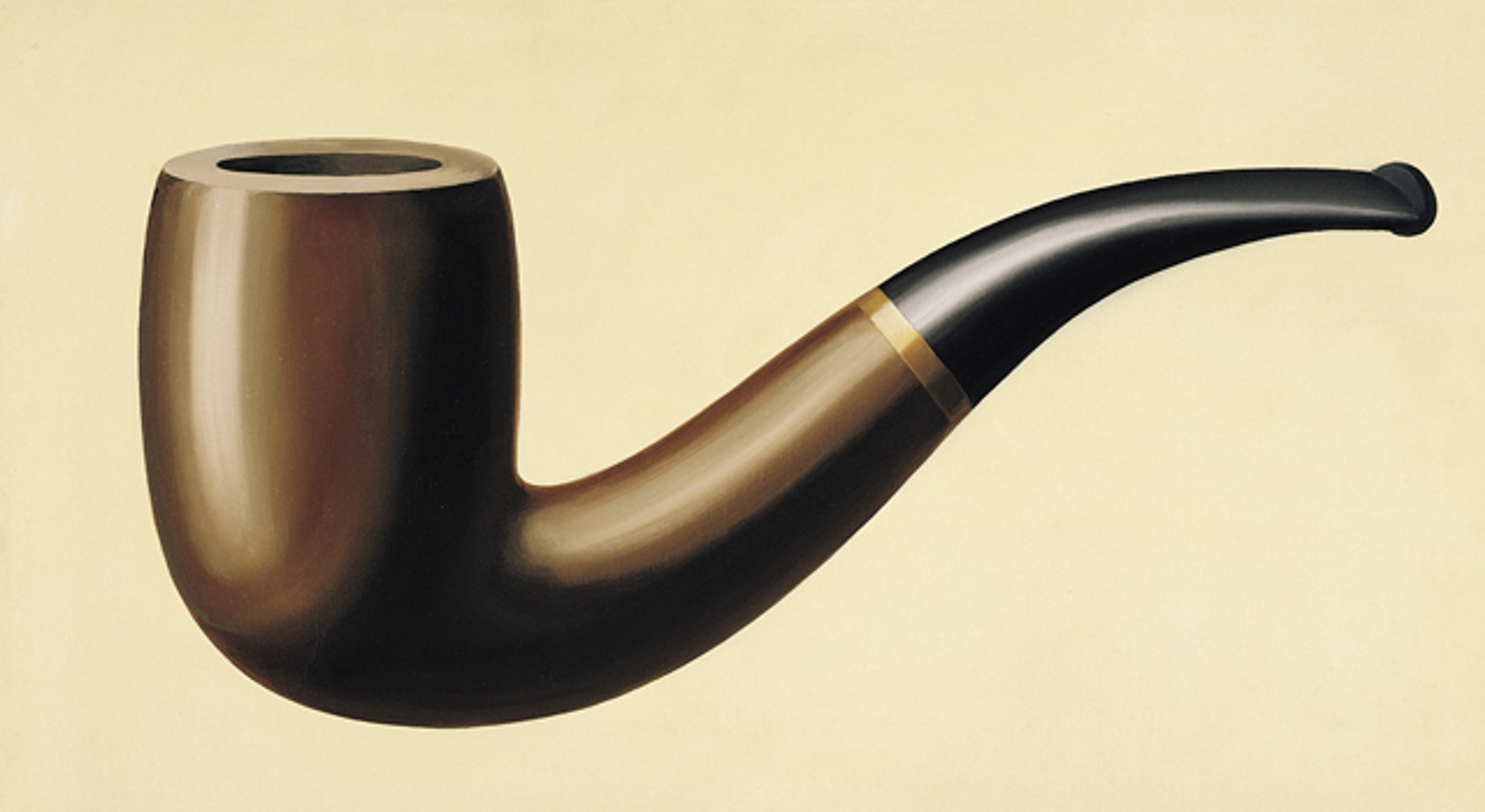 "The grand old painter died last night, his paintings on the wall"

Many of you will no doubt recognise the above lyric of Paul's. It's taken from the song 'Picasso's Last Words (Drink To Me)' as featured on the album Band on the Run.

As a life-long fan of the arts, many of our conversations with Paul are peppered with references to his favourite artists, be it the Dan Flavin-inspired artwork for his NEW album all the way back to the iconic artists The Beatles worked with in the 60s.

We are big fans of the arts here at PaulMcCartney.com (and living in London we are spoilt for choice when it comes to galleries!), so we were really happy when Paul suggested a new feature for the website; an art forum discussing the work of his favourite artists. To help us put together the profiles we spoke with journalist Adam Jacques and we're pleased to publish the first of these articles today on Belgian surrealist artist René Magritte.

Read Adam's profile of Magritte below and then check out Paul's personal memories and thoughts on the painter afterwards.

And remember to let us know your thoughts about Magritte's work in the comments...

When is a pipe not a pipe? It sounds just like an awful Christmas cracker joke. But the answer, depending on who you ask, may be either deceptively simple, or head-scratchingly profound.

If you were geared up for a cryptic response, one man you might have asked 50 years ago was René Magritte, the bowler-hatted Belgian painter born in 1898. He painted a number of pipes during his career – starting in 1929, with his first, ‘The Treachery of Images’ – and each one was loaded with the same mundane yet baffling sentence beneath, “This is not a pipe”. Though hard to believe, whole books and several academic papers have been dedicated to the subject. In fact, it’s still being talked about today – though perhaps not down the pub, where you can’t smoke anyway.

You might think that’s a lot of trouble for art critics to go to, except Magritte never painted anything ordinary, without doing something strange or extraordinary to it first. And pipes were just the prelude. He was a surrealist painter: one of a band of artists who collectively explored ways of unleashing the subconscious imagination, creating an art movement bursting with bizarre, dreamlike images in the process.

But if I was to shout, “NAME A SURREALIST PAINTER!” at you, the name you many might reach for first, is one of his contemporaries: Salvador Dalí.

Based in Paris for the early part of his career, Dalí was a flamboyantly dressed dandy, with a manically upturned moustache, a colossal ego (who writes a whole book dedicated to their moustache?) and a propensity to drive around in his white Rolls Royce with 500kg of cauliflowers stuffed in the back, as he liked their shape. Fellow Paris-based artist, and founder of surrealism, André Breton kept and bred praying mantises – on account of how the female of the species rapaciously devours the male after mating.

Magritte could not have been any more different. He looked like a banker, dressed in a sober black suit and a bowler hat. For much of his life he lived in a respectable, albeit anonymous-looking, Brussels suburb with his wife and he walked his Pomeranian dog at the same time every day. He held down a day job as a commercial artist, designing wallpaper and illustrating fur-coat catalogues, which nauseated him. But he had to graft hard until fame, and financial recognition, finally caught up with him, in the 1950s.

A poster boy for the faceless middle-classes, he existed uneasily alongside the other surrealists of Paris – where Magritte decamped for three years, in 1927. At least, until a quarrel at a Surrealist dinner party over a “bourgeoisie” crucifix worn by Magritte’s wife, Georgette, ended his friendship with them all: even surrealists could be petty. But once you come face to face with his paintings, you realise that the bowler hat was merely a front.

Magritte was, in many ways, far more subversive than the flamboyant Dalí. While it’s fair to say that no one painted better scenes of tigers-escaping-out-of-fish-mouths-while-simultaneously-mid-pounce-onto-a-naked women-on-an-iceberg, Dalí’s hallucinatory dreamscapes didn’t anchor in reality. Magritte’s work did: he made ordinary objects shriek.

Take one of his earlier assaults on the ordinary, ‘Attempting the Impossible’ (1928). An attractive nude (based on Georgette) is posing for the painter – while simultaneously in the act of being painted into reality. First it makes you snort with amusement, and then you begin to ponder the paradox: where is his canvas? And it’s all accomplished with a humorous wink, from Magritte.

He dabbled in folklore, too: thanks to Magritte, the captivating mermaid myth has been warped into something ludicrous: try reading 'Ulysses' where the sirens luring sailors onto the rocks look like Magritte’s sabotaged nymphs – svelte upper bodies swapped for the gormless heads of sardines.

Throw in a propensity for transforming regular objects, such as apples, into baffling question marks and a picture starts to build up: why is a colossal green Granny Smith filling a room to bursting point? (Did Roald Dahl think the same thing and then write 'James and the Giant Peach'?). Why are his trombones on fire? Why do his giant boulders float? And come to think of it, why do the floating mountains in 'Avatar' resemble them so closely? Magritte’s influence today – on fashion, film and art – is everywhere.

Levitating apples might have confounded Isaac Newton, but not Magritte, who used one in his self portrait ‘Son Of Man’. He liked to obscure the views of faces – particularly his own - as well as places. Hiding objects over other objects was one of his parlour tricks: like placing a perfectly aligned painted canvas in front of a window and simulating the real view from it.

Magritte, was always hiding behind something, whether language or class, or bathing in the anonymity of dozens of faceless salary men. Perhaps all that levitating in his 1953 work ‘Golconda’, was how Magritte saw himself: conducting extraordinary feats of ordinariness.

He wasn’t the only artist who, through the cracks of a quiet, clean-cut image, you can glimpse subversion: like all the lonely people, his work stood slightly behind from his public persona.

But back to the pipe which isn’t. Take another look at the first picture: it may conjure up a musty aroma, or maybe you’re imagining the smoothness of polished wood. But can you stuff it with tobacco, light it and then – cavalierly casting health concerns aside – deeply inhale on it? Magritte wanted us to know that it couldn’t possibly be a pipe, because you couldn’t do those things with it. But if it isn’t a pipe, perhaps Magritte wasn’t a painter; rather, a philosopher. Maybe we all want the potential to subvert our ordinary lives, and Magritte’s aim was to help us experience the mystery in the mundane – one levitating apple at a time.

"I’ve always loved Mr Magritte’s work and have admired him since the 1960s when I first became aware of his work. I love his paintings so much that I once took a trip to Paris to visit Magritte’s art dealer Alexander Iolas and had a very pleasant meal in his apartment above the gallery. We then went downstairs to see the paintings and I was able to select three pictures.

"Robert [Fraser - art dealer and friend] also brought me other interesting Magritte’s pictures over the years and one of them became the inspiration for the original Beatles Apple Records label: the big green apple was inspired by Magritte.

"We were amongst the many people who have been hugely influenced by this great artist's work."

Paintings On The Wall