New ‘Out There!’ tour launched in Belo Horizonte 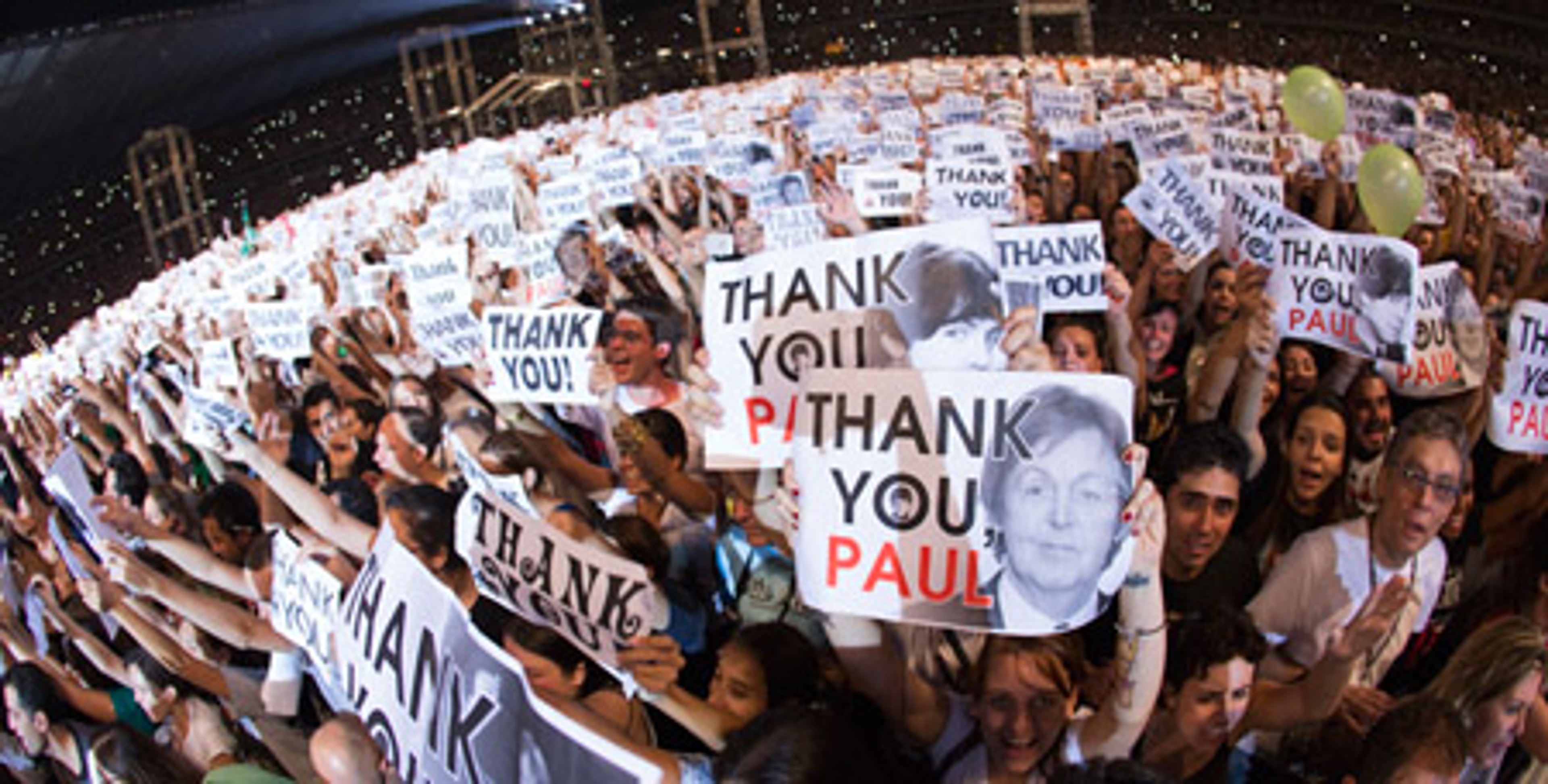 Paul brings Beatlemania to Brazil
New "Out There!" tour launched in Belo Horizonte

Last night, Saturday 4th May, Paul thrilled a sold out audience of 55,000 people in the city of Belo Horizonte, Brazil. The show at the massive Estadio Mineirao marked the opening of his all new "Out There" tour, which will travel across six countries in the coming months.

The show opened with Eight Days A Week, which Paul had previously only played live once with The Beatles in 1965. The setlist included many more treats for the fans with the first live performances of Beatles classics Your Mother Should Know, Being For The Benefit Of Mr Kite!, Lovely Rita and All Together Now. Paul also performed his solo classic Another Day for the first time since 1993. Wings favourites Listen To What The Man Said and Hi, Hi, Hi were also added to the setlist having never been performed at a Paul McCartney solo show before. We Can Work It Out was also added back into the setlist, Paul last performed it at the Glastonbury Festival in 2004.

The show was packed with Paul’s biggest hits spanning his career that have become firm live favourites in his shows including Band on the Run, Hey Jude, Live and Let Die, Yesterday and Let It Be.

The brand new production, which fills over 31 trucks worth of equipment, also saw spectacular lasers and lighting, huge pyrotechnics, state of the art video displays and a special riser that saw Paul raised up 20ft above the stage to perform Blackbird and Here Today acoustically on his own. During Hey Jude the audience held up home made ‘Thank You’ signs, a surprise for Paul organised by fans on social network sites.

The city of Belo Horizonte gave Paul a warm reception with billboards across the town welcoming him. Fans camped outside the stadium in the days running up to the show in order to secure the best position when the doors opened. Local papers declared ‘Beatlemania’ had come to Brazil as Paul’s every move since landing in the city on Friday morning became headline news with hundreds of fans lining the streets around the hotel he was staying in.

Last year local fans had started their own petition on Facebook to get Paul to play in Belo Horizonte. After securing the endorsement of thousands of residents the petition was delivered to Paul’s London office. One of the fans, Adriana Mundo (28), who had supported the petition said: “When we heard Paul was coming here we couldn’t actually believe it. It’s a dream come true for us. We’ve never had anything like this here before. It’s such an honour for our city.”

At the end of his show Paul got the girls up on stage from the audience who originated the petition – Priscila Brito (27), Luisa Mattos (25), Camila Flores (25) and Cecilia Cury (21) – who were shocked by the recognition they received from their idol. Paul publicly thanked the girls and also signed Cecilia’s Beatles tattoo.

Belo Horizonte Setlist:
• Eight Days A Week
• Junior's Farm
• All My Loving
• Listen To What The Man Said
• Let Me Roll It
• Paperback Writer
• My Valentine
• Nineteen Hundred And Eighty Five
• The Long And Winding Road
• Maybe I'm Amazed
• Hope Of Deliverance
• We Can Work It Out
• Another Day
• And I Love Her
• Blackbird
• Here Today
• Your Mother Should Know
• Lady Madonna
• All Together Now
• Mrs Vandebilt
• Eleanor Rigby
• Being for the Benefit of Mr. Kite!
• Something
• Ob-La-Di, Ob-La-Da
• Band on the Run
• Hi, Hi, Hi
• Back in the U.S.S.R.
• Let It Be
• Live And Let Die
• Hey Jude

UPDATED: WINNIPEG AND REGINA PRE-SALE INFO / Canadian Dates Added to "Out There" Tour!

UPDATED: PRE-SALE LINKS / Paul Returns to New York on All-New 2013 "Out There" Tour

Milwaukee Date Added To 'Out There' U.S. Tour!