PaulMcCartney.com gets #OutThere in Japan 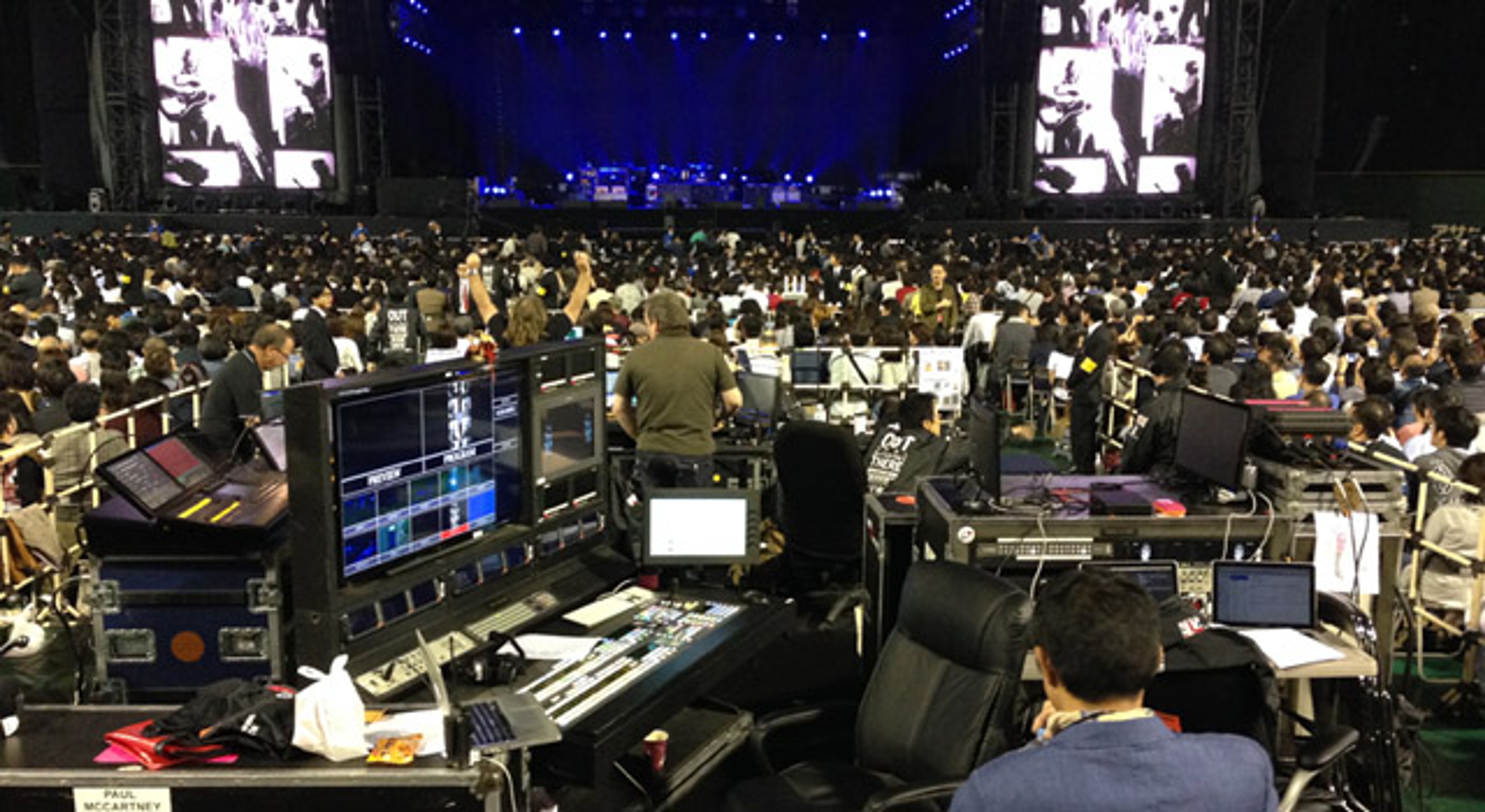 Readers of the PaulMcCartney.com monthly newsletter - ‘What’s That You’re Doing?’ - will know that last month we were invited to Tokyo to join Paul during his ‘Out There’ tour of Japan. Our reason for visiting was to help Paul launch LINE’s first-ever set of Sound Stickers, the release of which coincided with his first Tokyo date of the tour.

It was such a fun adventure – and because the ‘Out There’ tour is about to begin in the UK – we thought we’d give you a look behind-the-scenes into life on the road with Paul.

Wednesday 22nd April: Arrival in Tokyo
Following a 12-hour flight from London, we landed in Tokyo early Wednesday morning …and went straight into a meeting! This meeting was to begin working through questions submitted via Paul’s Japanese language LINE account for a Q&A we would be running with him the following day. We had been allowing fans to send in their questions since Monday - when Paul arrived in Osaka for the first show of the tour – and were so happy by how many fans had already taken part. Working with two very wonderful Japanese friends we began selecting some of our favourite questions.

Thursday 23rd April: LINE Sound Stickers and Paul’s first night at the Tokyo Dome
We had an early start on Thursday and were jet-lagged and discombobulated (a word we used a lot during our trip!). This was the day we launched Paul’s new set of LINE Sound Stickers – their first set to be released globally. Having worked so hard on the stickers we were really happy to finally get them *ahem* ‘out there’!

This would be Paul’s third set of LINE stickers and we were all very excited when he went into his studio in March to record phrases for them in both English and Japanese. The stickers allow fans to get Paul to bring his voice to private messages on the LINE messaging app (check them out HERE!). So, if you want to tell someone something is ‘Wonderful’, or say ‘I Love You’ or ‘Let’s Do It!’ - for example – you can now do it using Paul’s voice!

The stickers launched in the morning and once we’d made the announcement, we made our way to the Tokyo Dome where Paul would be playing live that evening. For fans unfamiliar with the Dome, take our word for it when we say it’s huge! The venue holds around 55,000 people and is the home venue for the Yomiuri Giants baseball team (baseball is a big deal in Japan!).

We met up with our friends in Paul’s touring crew – who were all talking about the new Sound Stickers! - and went to watch soundcheck.

Paul’s soundchecks are something else. We’ve been lucky enough to watch them a few times before and he pretty much plays a short gig to the lucky fans (and crew!) that get in to watch. But as soon as Paul and the band began playing ‘Lady Madonna’ we knew that was our cue to leave. We had to walk backstage (which is not a short walk in the Tokyo Dome!) to pick the final questions for the LINE Q&A and our time with Paul would begin shortly.

Once it turned 7pm - the closing time for fans to submit their questions - we made our final selection and then sat down with Paul to go through them. By the time the entry period had closed over 250,000 fans had taken part!

Now, this being a Q&A on the day that Paul's LINE Sound Stickers had been released, he spent around half our time together gleefully answering as many questions as possible using them, sometimes without even needing to speak himself!

We’ve done quite a few Q&As with Paul now and love them! Where else would you get to sit down with your boss and ask him what he would do if he were a woman for the day? Or get your boss to sing you his ringtone?

The Q&A was originally published in Japanese on his LINE account during the tour but earlier this week we published it in full in English here on PaulMcCartney.com. You can read it HERE!

Here’s a video of Paul answering one of the questions that was also shown on Japanese TV:

Following the Q&A we split into two groups; one group typed up the Q&A while the other went out to live tweet from the gig. You can check out our tweets from Japan on Paul’s Japanese language Twitter account HERE!

Once the Q&A had been typed up we went and watched the rest of the concert from the side of the stage. Looking out at 55,000 happy fans singing along to every word is, without doubt, the most incredible way you can end your day!

Friday 24th April:
On Friday we went to visit our friends at LINE to talk about all the exciting things we have done (and could do!) with them and Paul. We were super happy when they told us Paul's Sound Stickers were doing so well!

We also discused Paul's new GACHA items on his LINE PLAY account that he launched the week before the tour began (more info HERE!). He was getting so many visits to his room!

LINE's office is in the very cool district of Shibuya so after our meeting we went and did some sightseeing including visiting the famous Hachikō statue (if you don’t know the very sweet story of Hachikō click HERE!).

Saturday 25th April: Paul’s second night at the Tokyo Dome and a birthday!
Many fans may know of the McCartney family's Meat Free Monday initiative. This is the idea that going one day a week without meat can really make a difference to both your health and the planet. We help out with their website and social networks too so on Saturday we met up with Paul’s tour caterers to photograph the dishes they were serving up for him, his band and crew. Paul’s catering on the road is meat free so it’s always fun to see what they’re creating (and it tastes incredible!). We post some of their dishes in the Meat Free Monday feature ‘Recipes from the Road’.

We watched Paul’s concert from the mixing desk that evening, which is one of the best seats in the house. We were completely surrounded by Paul’s fans so the sound when he came on stage was nearly deafening!

Being music fans we are obviously aware of how popular Paul’s songs are, but the wonderful thing about being amongst the crowd for the show is you get to witness first-hand how much his music means to people. During ‘And I Love Her’ for instance we all had lumps in our throats as we watched a couple hugging in tears and singing the song to each other! (We’re even getting emotional recalling the moment!)

PaulMcCartney.com also had a birthday on the Saturday so once the concert finished we joined Paul and his crew at his hotel for the after show party. After being there for around an hour we were suddenly surprised by Paul wheeling out a large birthday cake and leading the whole room in singing ‘Happy birthday’. What a way to celebrate our birthday!

Sunday 26th April: Sleep!
Following on from four days of non-stop work and very little sleep we took Sunday off to try and catch up! We still managed to find time to go adventuring though. Tokyo is such a great city to walk around. (And everywhere we went we saw this truck – we think it was following us!)

We also received a very nice email on Sunday. Fans may have seen that we often run ticket competitions for many of Paul’s shows through the website and on Twitter. A lovely highlight of our day was receiving an email from the ticket winner from the night before. The fan wrote to say,

"I want to thank you from the bottom of my heart for the best seats, and letting us be part of the most wonderful concert last night. I have never seen any concerts from such good seats, let alone at Tokyo Dome and Paul’s concert. Thank you very much for choosing me. I cannot express in words how grateful I am."

Monday 27th April: Paul plays his third date at the Tokyo Dome... without us!
We spent Monday in meetings again with our friends in Tokyo. We also had US tour announcements and a pre-sale to look after in the evening (all these different timezones to think about – very discombobulating!) which sadly meant we couldn't make Paul's show that night!

Tuesday 28th April: Paul plays the Budokan!
Tuesday was a very special day for everyone as Paul was playing at the Budokan. If you’re unfamiliar with the venue, the Budokan is a highly respected martial arts arena in Tokyo that has also been host to some of the coolest gigs ever (including The Beatles!).

We got to the Budokan early for the show (on a gorgeously warm day!) to witness thousands of fans waiting for Paul outside the venue. Literally thousands!

As we watched soundcheck again (we're so lucky!) we noticed that a small gift had been taped to the back of every chair in the venue. We had been told about this earlier – on the hush hush! - and that they would play a special part in the show that evening...

The crowd were let in following soundcheck but we noticed a large group of fans who stayed outside. Again, our Japanese friends explained what was happening: So many fans wanted to come to Paul’s shows but they were sold out, so at each of the concerts fans who couldn’t get tickets held parties outside listening to the sound coming from the venue. Joining the concert like this is known as "otomore-sansen"!

The show was one we will always remember. The Budokan is such a beautiful venue and you could tell how happy Paul was to be there. The concert featured the first-ever performance of ‘Another Girl’ from The Beatles album ‘Help!’ and when Paul began the first chords of ‘Let It Be’ something very special happened. Stuart Bell - Paul’s publicist and friend of PaulMcCartney.com - had tipped us off earlier in the concert so we made our way down to the side of the stage just in time to see the wristbands light up the whole venue.

The lights made several appearances throughout the rest of the show including making a Union Jack! Check out tour photographer MJ Kim's photos from the concert HERE!

We certainly couldn’t have asked for a more spectacular way to finish our trip and we were still under its spell the next morning when we flew back to London, exhausted but very happy.

Did you see Paul during his ‘Out There’ tour of Japan? If so we’d love to hear your memories of the show in the comments below…

Paul is getting 'Out There' in Charlottesville and Columbia

Paul is getting back 'Out There' in Philadelphia

New Video: Paul is getting #OutThere in Japan