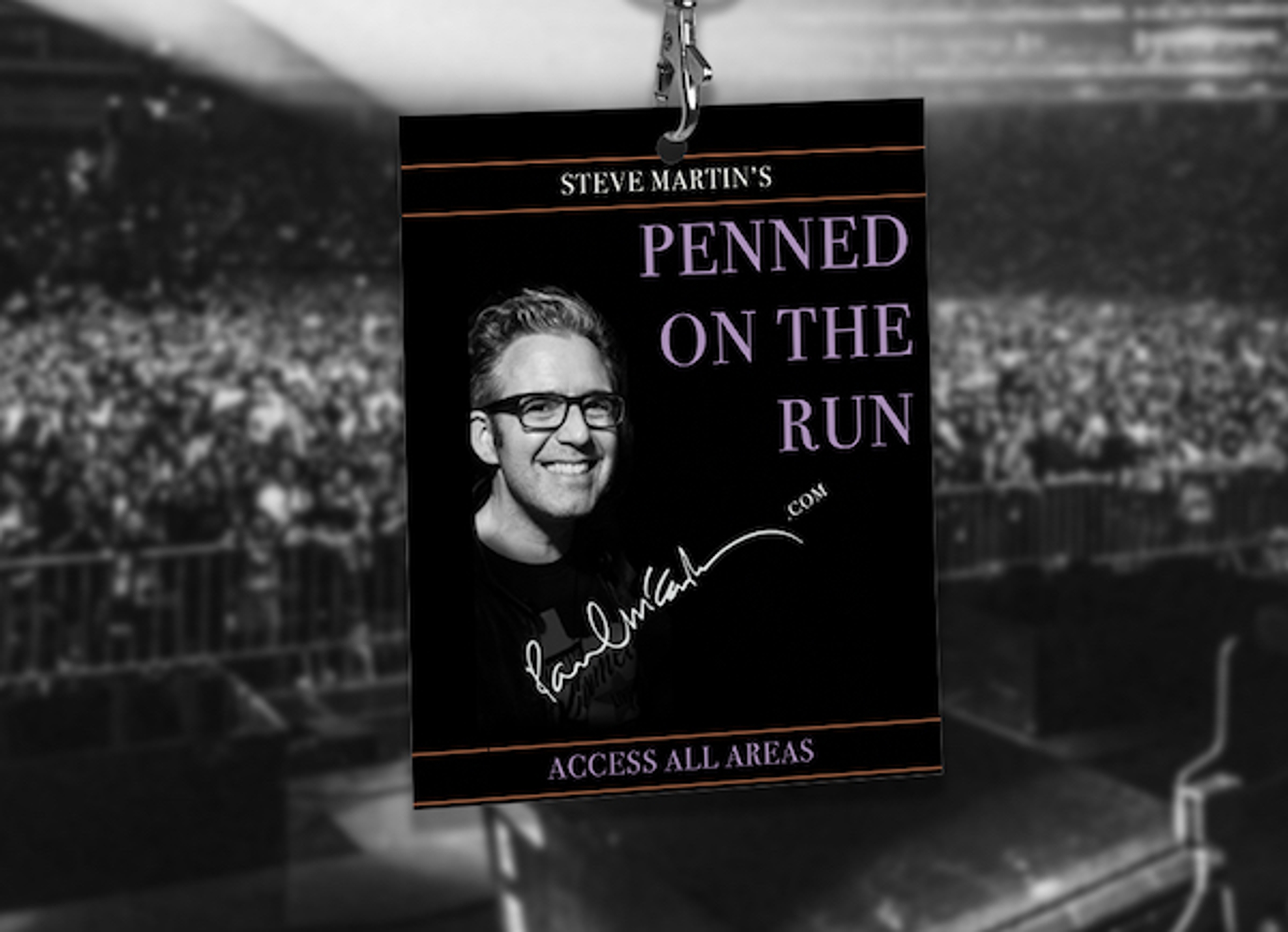 PENNED ON THE RUN #2

Paul’s ‘summer of live’ is definitely in full swing, performing sold-out shows left, right and centre across North America on his record-breaking #FreshenUpTour. We’ve caught up with Paul's US publicist Steve Martin for to the second installment of PENNED ON THE RUN.

Barely a week’s respite and it was time for Paul’s second show at San Diego’s massive Petco Park—and his fourth show ever in San Diego: the first being The Beatles’ 1965 concert at Balboa Stadium, and the second with Wings in 1976 at the former San Diego Sports Arena (since rechristened Valley View Casino Center). And we’re not counting a 2003 private party in Rancho Santa Fe.

This time Paul’s return to San Diego came a bit sooner than the 38 years between Wings in 1976 and his solo show in 2014. Here he was back at Petco Park, once again playing (and once again selling out) the same 40K+ capacity home of the Padres as he did five years before—a show that the word “legendary” doesn’t even quite do justice. I mean… how many times do you see the word “WOW!” in the headline of a major daily paper?  I honestly only recall that one time in the review of that 2014 Paul show by the SAN DIEGO UNION TRIBUNE—the very same review that described the evening’s vibe as follows: “time almost stood still as Beatlemania was seemingly reborn at an ecstatic downtown celebration.”

Soundcheck simmered in the sunlight of a picture-perfect day, reminding us of how Paul’s voice and a ukulele can immerse a stadium in joyful sound, as he soloed 'Ram On'. One particularly boisterous 'Lady Madonna' closed out the pre-show festivities and, from there, it was on to the (impossible) task at hand: Topping that 2014 Petco Park show. And did Paul rise to the (unimaginable) challenge?

As the show clanged to life with the first San Diego performance of 'A Hard Day’s Night' since that legendary Beatles show, tens of thousands of voices sounded a unanimous verdict: Yes. The charge in the air never let up--not even during 'Something' and 'Here Today',  the tributes to the dearly departed with whom Paul shared that San Diego stage in 1965—it simply changed current.

One unusual sighting unique to the Petco audience was a fan-made sign emblazoned with the motto of Paul and George Harrison’s alma mater, the Liverpool Institute: “Non nobis solum sed toti mundo nati,” translated: “We are born not just for ourselves but for the whole world.”

Paul mused aloud on how appropriate that creed was for a school attended by half of The Beatles: “For the world were we…”

Nearly three hours of peak Paul whizzed by, punctuated by surprises like NBA legend Bill Walton caught on camera (in fairness, it’s difficult for a man of his stature to not be “caught”), an especially raucous 'Helter Skelter' and, in addition to the traditional barrage of pyro and flashpots that accompanies 'Live and Let Die', San Diego was bid farewell with a second fireworks display at the close of  'The End'.

“Welcome back to Phoenix…”

To kick off this evening’s soundcheck, Paul welcomed himself and, well, all of us back to Phoenix with a sweet, melodic jam with the above refrain—before turning on a dime to fire up an incendiary 'Matchbox' followed by an exuberant 'Coming Up' and, ratcheting the electricity up that much further, 'Drive My Car' right into 'I Wanna Be Your Man'. Barely half an hour into soundcheck, it was already clear how special Paul’s first show in Phoenix since his August 2014 US Airways Arena date was going to be.

(Speaking of 'Drive My Car'… you know local Macca mania has spread well beyond the confines of the venue he’s playing when even the highway signs herald Paul’s arrival: “A Long & Winding Road Needs Alert Drivers” read one, while another lit up with “Ob-La-Di Ob-La-Da Life Goes On If You Slow Down”—was that second sign a clever combo of two Beatles references? 'Ob-La-Di…' being the obvious live staple of Paul’s shows since 2010, and the deep cut 'Slow Down', the Larry Williams tune The Beatles covered in 1964? If anyone from the Arizona Department of Transportation is reading this, let us know!)

Then it was time for Paul to take the capacity crowd at the Talking Stick Resort Arena (same building as 2014 for my fellow trivia nerds, different name) on an “emotional journey from The Beatles to his latest work” (sweet headline, ARIZONA REPUBLIC). And yes, we did start with some Beatles ('A Hard Day’s Night,' 'Can’t Buy Me Love,' 'Got To Get You Into My Life'), some Wings ('Junior’s Farm','Letting Go'), and two trips to Egypt Station ('Who Cares', 'Come On To Me'), all before the first song tonight’s setlist had in common with Paul’s first play at this same building, back in 2002 when it was called the America West Arena ('Let Me Roll It').

However, as anyone who’s ever been to one of Paul’s shows well knows, the name, place and size of the venue are irrelevant once that “emotional journey” (thanks again, ARIZONA REPUBLIC) gets underway. Once 'Nineteen Hundred and Eighty-Five' or 'Dance Tonight' kicks in, you’re going to be moving whether you’re one of the thousands in an arena or stadium crowd or packed into a surprise club gig—and, as at least one reviewer has noted, time and space become pretty much irrelevant at a McCartney show.

And so it was, with another nearly three hours folded into a seeming instant, the closing Abbey Road medley of 'Golden Slumbers', 'Carry That Weight', and 'The End' was, as ever, met with tears of elation, and the Freshen Up caravan was Vegas-bound.

Here we go… Two nights in the City of Lights…

The Beatles and Las Vegas go back, I mean way back; all the way back to August 1964 at the Convention Hall. And the, ahem, LOVE is ever-present in the physical form of 'The Beatles LOVE by Cirque du Soleil' show, which has been packing them in at The Mirage since 2006. That’s 13 years--and two-anniversary celebrations, 5 years in 2011 and 10 years in 2016, attended by Paul and Ringo and the extended Beatles family.

Paul’s post-Beatles relationship with Las Vegas has deep roots as well: In April 1993, he opened the U.S. leg of 'The New World Tour' at the Sam Boyd Silver Bowl, technically in East Las Vegas, since renamed Whitney, Nevada. 2002 saw Paul play the MGM Grand Arena three times, twice on the Driving USA Tour and once on Back in the U.S., with repeat visits to the same venue including the U.S. Tour in 2005 and Up and Coming in 2011. Between those two visits, Paul played a truly historic intimate show as part of The (new) Joint at the Hard Rock Hotel’s 2009 (opening series—a magical evening not one of the lucky 4000 who managed to score tickets will ever forget).

Which brings us to Paul’s 2019 doubleheader at the relatively new T-Mobile Arena (opened in 2016). Paul’s first-ever shows at the T-Mobile Arena would actually end an uncharacteristically long absence from Sin City—a full six years since Paul’s surprise mini-set at the 2013 iHeartRadio Music Festival.

So here we were, new venue, new tour, new songs from Egypt Station to be played for the first time before a Vegas audience… and it was, as the LAS VEGAS WEEKLY described it, “awe-inspiring.” A particularly loud crowd was intent on belting out every lyric, from Beatles and Wings mainstays to 'Who Cares' and 'Queenie Eye', taking breaks only when they knew they had no chance of hitting certain notes, like the evening’s show-stopping rendition of 'Maybe I’m Amazed' during which “McCartney has rarely sounded better” (LAS VEGAS WEEKLY) or a “gut-wrenching” (the WEEKLY again) 'Here Today'.

Just when it seemed the energy levels couldn’t be ratcheted any higher than a truly deafening 'Hey Jude' singalong, a once in a lifetime cameo threatened to convert the T-Mobile Arena to an open-air venue:

And there, fresh from his band’s residency at the nearby Park MGM, was the Aerosmith frontman himself, resplendent in pinstripe stage gear and ready to vocally spar with Paul on the same Beatles proto-metal classic covered by Aerosmith as early as 1975, 'Helter Skelter'. Ears ringing and minds blown, a stunned grateful throng bellowed its agreement as Paul joked “The kid is good, isn’t he?” and within minutes the hashtag #MaccaSmith was propagating.

How to follow that…? Well… Night two in Vegas saw a second sell-out crowd get lucky once again come encore time, this time with a setlist rarity jackpot: “Saturday night… Just got paid” Paul mused before firing off that unmistakable 1-2-3-4! Signaling the boys to rip into 'I Saw Her Standing There'. Jaws dropped as side 1 track 1 of Please Please Me was played for a U.S. crowd for the first time since last September’s Egypt Station surprise release show at Grand Central Station’s Vanderbilt Hall in New York City.

Celebs sighted singing along during the evening: Amber Valletta and Brad Garrett. Neither of them got up to sing 'Helter Skelter' though…

After two such unforgettable master classes in live rock 'n' roll, it was time to say goodbye to the desert… and time to update that Favorite McCartney Performances list, LAS VEGAS REVIEW-JOURNAL!

Freshen UpPenned On The Run