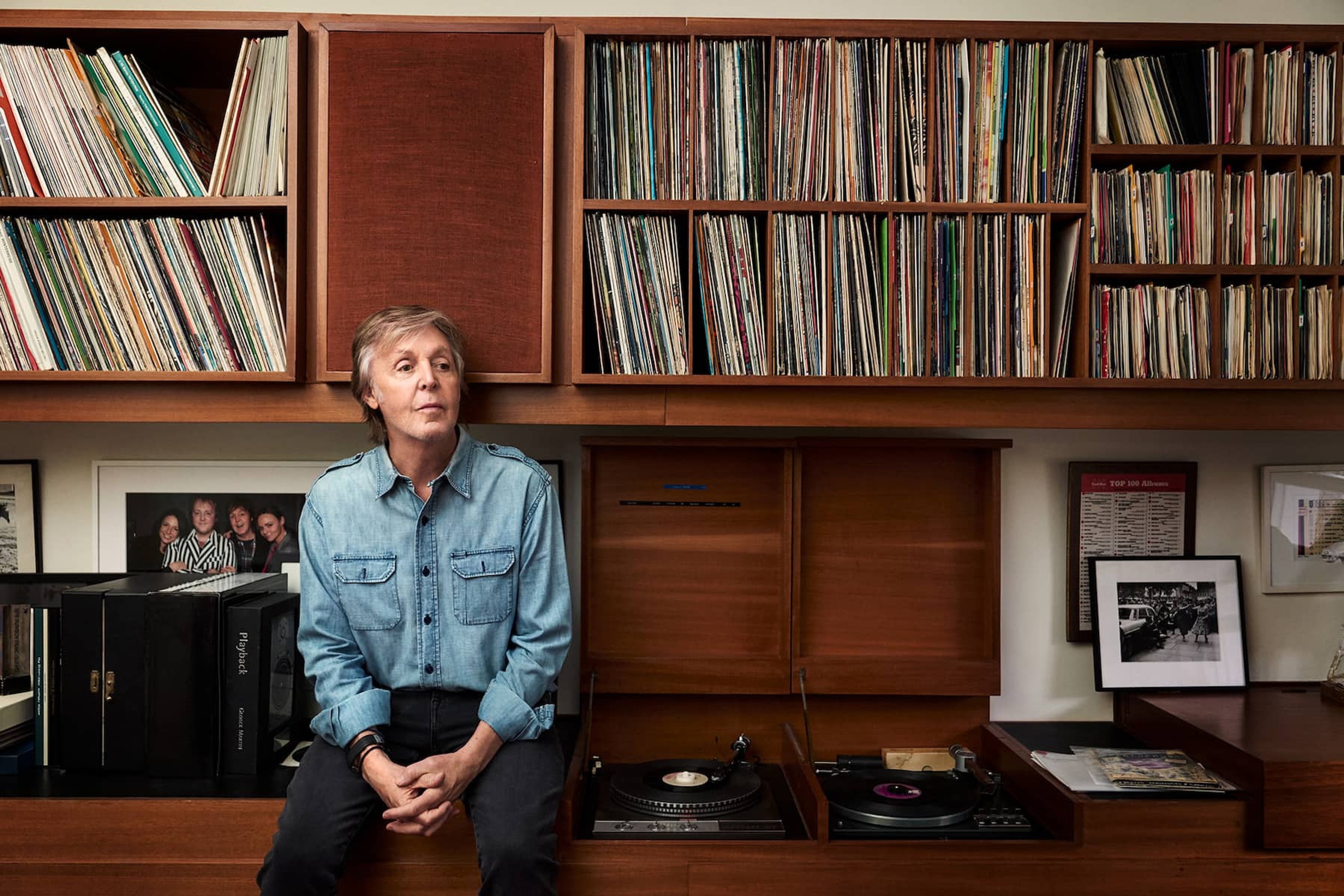 Writer and journalist Rob Sheffield examines Paul's unique relationship with the 7" single format. This excerpt is taken from the introduction to The 7" Singles Box essay book, included in the physical boxset and out Friday 2 December.

One day, back in the 1950s, a young boy named Paul McCartney rode a bus all the way across Liverpool to hear a record: a seven-inch single. With his mate John Lennon, he went to find it. The grail of their quest: ‘Searchin,’’ the 1957 classic by the Coasters. “Nobody had it,” he recalled many years later. “The drummer in the Quarrymen, Colin Hanton, knew some guy that had it, but we had to get on the bus, do two changes of bus routes. Didn’t matter. Half an hour away. There was such a passion about the song ‘Searchin’.”

The guy on the other side of town had the treasure: that Coasters single. The boys listened, learned the words so they could play it in their band. But they also ended up nicking the single. “We couldn’t return it,” Paul confessed. “We just had to have it; it was like gold dust.”

Nobody has ever understood the power of the seven-inch single like Paul McCartney. When it comes to singles, he defines the art form. He wrote his first hit in the Fifties—‘Love Me Do’—and is still writing them over 60 years later, with his blockbuster McCartney III. Nobody’s ever had his knack for getting it all—a sound, a feeling, a way of life—into seven inches of wax.

The 7” Singles Box tells McCartney’s life story in 80 vinyl singles, right after his 80th birthday. It starts with ‘Another Day” from 1971, his first 45 after the Beatles. It carries through his one-of-a-kind career, from Wings up to McCartney III. These singles add up to a sprawling saga—an epic, really. It’s no ordinary way to tell the story of a life, but then, this is no ordinary life.

It was Paul McCartney who showed the world how much magic a pop single could do in three minutes flat. And it’s Paul McCartney who’s made more great ones than anyone else. Even after he practically invented album rock with the Beatles, he never lost his genius for singles. He’s still got a Wurlitzer jukebox full of them in his office, over 60 years after he bought his first one: Gene Vincent’s “Be Bop A-Lula.”

Many of these tunes are classics, known and sung around the world—they were hits before your mother was born. Others are cult favorites—buried treasures waiting to be rediscovered. Some of us cherish ‘Old Siam, Sir’ or ‘C Moon,’ Jenny Wren’ or ‘So Bad.’ One favorite from this collection: ‘Temporary Secretary,’ from 1980, a synth-pop blast from what he calls his “mad professor” period. It sat unnoticed for years, until rock hipsters suddenly realized it was a lost masterpiece.

Growing up in Liverpool meant venturing down to the docks, where U.S. sailors brought records from across the sea. Getting hold of the record was a sacred quest—as Ringo Starr recalled, “You’d kill for that piece of plastic.” At 15, Paul got the “Twenty Flight Rock” single by rockabilly pioneer Eddie Cochran, so he could learn it on guitar. One Saturday afternoon in the summer of 1957, he played it for a group of older boys, a skiffle group who called themselves the Quarrymen. Their singer John was impressed—a rare occurance for him. But a friendship was born that day. That meeting changed the future of music—it shaped the lives of millions of people. But it all came down to Paul getting his hands on that plastic.

With the Beatles, McCartney defined singles before they were fashionable. Then he defined them after they were fashionable. He’s kept defining them as they’ve been going in and out of style, even now as these 45 RPM revolvers have made such an impressive surprise vinyl comeback. Really, the one constant in the history of the seven-inch is that Paul will be the guy showing everyone else how it’s done.

Anybody who loves pop music knows how powerful a single can be. For many of us, Paul was the one who taught us. For me, an American kid growing up in the Seventies, it was ‘Jet,’ one of the first 45s we had in our house. A hand-me-down from the cool teenage girl next door. My sisters and I played it till the grooves wore down, mesmerized by the swirling green-apple label. The impact of ‘Jet’ was life-changing, even if we couldn’t figure out what it meant. I still have that seven-inch, even though it’s so scratched-up by now, it would scare any stylus away. But the grooves are etched into my soul forever.

The past 20 years have been a glorious time to be a McCartney fan—the man has been on a roll ever since his 2005 gem Chaos and Creation in the Backyard. He’s never willing to settle for nostalgia. He’s just made two of his best albums, Egypt Station in 2018 and McCartney III in 2020, both Number One hits. McCartney III was his surprise solo statement recorded in quarantine down on the farm—turning lockdown into “rockdown,” as he put it. He also dropped McCartney III Imagined, with remixes from younger artists like Phoebe Bridgers, Beck, Anderson .Paak, St. Vincent, and Blood Orange. After six decades at work, he can top the charts with something new. How many artists can even dream of that?

And in his spare time, he’s still the greatest live performer on earth. On his Got Back tour this summer, every night was a three-hour celebration. He starts the show early, stays late, gives us all the night of our lives, yet has more fun than any of us. Some nights, it feels like the only one in the building not exhausted is Paul.

The singles in this collection go back to 1971—but they don’t feel like they belong to yesterday, and that’s because they don’t. Paul McCartney’s music is a story we keep telling ourselves, by dreaming along with the songs. We listen to these tunes, not because they remind us of the past, but because we carry them with us into the future. The 7” Singles Box is a tribute to the most extraordinary of lives, one 45 at a time.

The 7” Singles Box raises a question: Is it possible to be the world’s most famous, most respected, most acclaimed musician—if not simply the planet’s most beloved human—and still be underrated? McCartney is the most popular of artists, yet also the most mysterious. Let’s face it: as a culture, we haven’t even begun to fathom the mysteries of Paul McCartney. The more you listen to these singles, the more you keep asking the question: How is this possible?

There’s no answer to that mystery here. All you can do is is marvel at the music and listen to what the man said, in one of his Number One hits: The wonder of it all, baby.

The 7" Singles Box contains 80 x 7" singles from across Paul's career. It features 163 tracks over 10 hours of music, and contains a 148-page book with full introduction by Rob Sheffield and a foreword by Paul. Each box also comes with one exclusive randomised test pressing.

The boxset will also be released digitally on Friday 2 December. Pre-save and pre-add here.