You Gave Me The Answer - Life on the Farm in Scotland 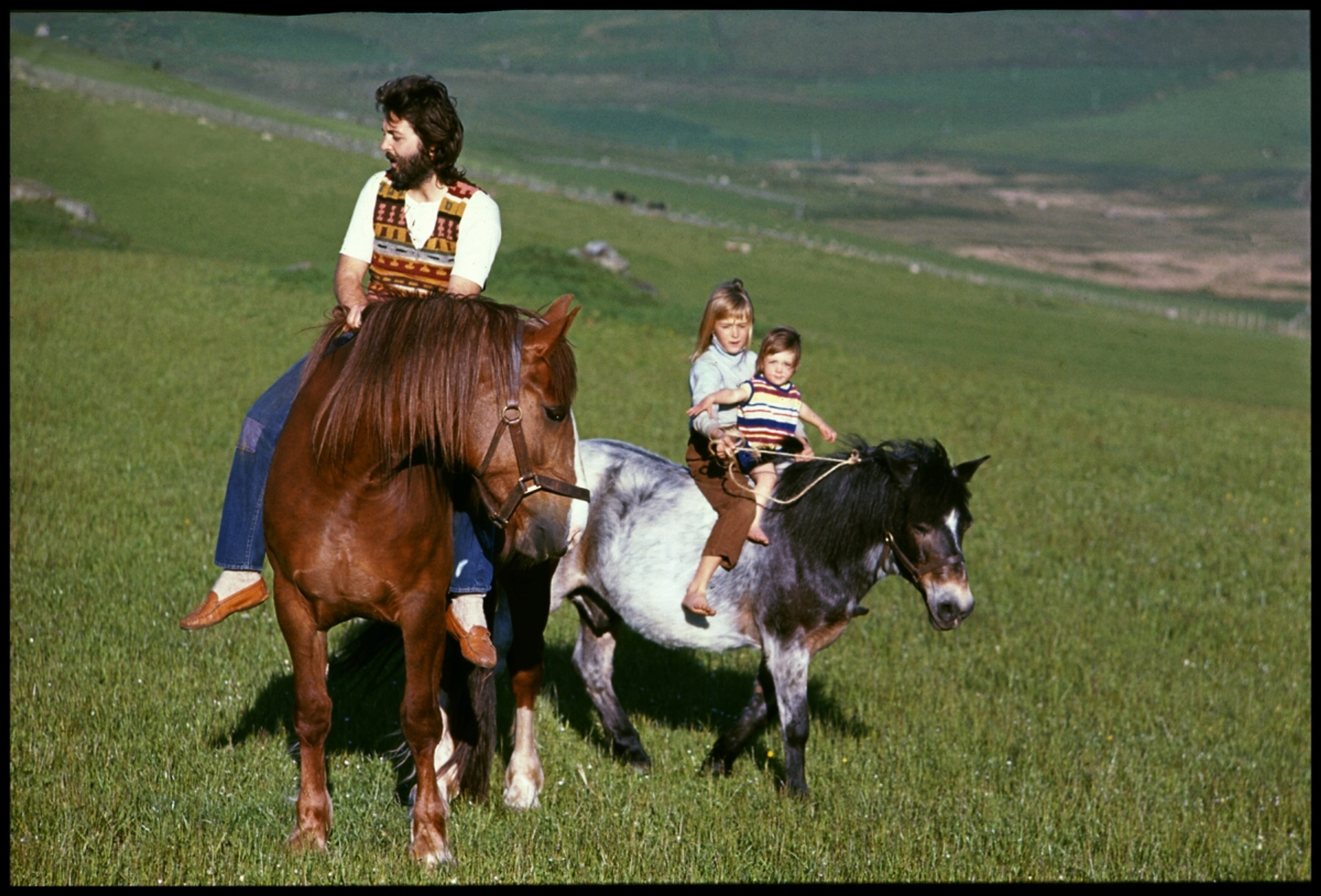 Along with the rest of the world, we’ve learnt a lot about Paul’s life and the inspiration behind his songs in the last month, thanks to the publication of his new book The Lyrics! From growing up in Liverpool to The Beatles’ early touring days, the formation of Wings to working on his latest studio album in lockdown (or ‘Rockdown’), the two-volume book is packed with stories that have never been told before.

To celebrate the fantastic news that The Lyrics is Barnes & Noble’s Book of the Year (hooray!), Paul sat down with CEO James Daunt for an in-depth chat about the book. Writers from around the globe got in touch to send in their questions, and there was one from award-winning Scottish author Ali Smith which caught our eye here at PaulMcCartney.com. Unfortunately, the question came in a little too late for James Daunt to ask it, but we liked it so much we wanted to know the answer too!

In the year that Paul celebrated the 50th anniversary of RAM, we’re keen to know even more about Paul’s time in Scotland in the late 60s and early 70s as it seems to us – and fans who have read the book – to have been quite a formative period. And with today being St Andrew's Day, we couldn't think of a better moment to ask Paul all about it! So, take it away Ali, hen…

Ali Smith: I understand you have a farm in Scotland where the sheep only die when they’ve reached the natural end of their lives – a farm with no slaughtering involved. It seems to me such a beautiful, sensible, and right thing. How did that come about?

Paul: It came about when we went vegetarian: the lambs were the reason for it. We’d seen them gambolling happily in the first month of their lives, in the fields, and realised that we were eating leg of lamb and made the connection. That’s really how that whole philosophy started. We thought, ‘If we’re giving them a life, then we might as well give the whole herd their lives’. It reminds me of that song in Hamilton_,_ ‘My Shot’: it’s their shot at life.

PaulMcCartney.com: Did the change happen overnight with the farm? Did it go from one day being a sheep farm to the next letting them all live their lives?

Paul: Yeah, that was what it was. We sheared them, so that became something the farm could do. There are people who think it’s cruel to shear sheep, but I don’t, because if you get a hot summer the sheep really suffer. You just look at them and they’re panting, as if they’re saying, ‘Please shear me!’ Then we would do stuff with the wool – either sell it or use it to make rugs.

PM.com: Scotland is quite far away from Liverpool and London, where your life had mostly been based up until that point. How did you come across the farm? And what was the inspiration going there?

Paul: I was always drawn to the romantic notion of the Highlands. And John was too, he had visited relatives who had a croft in the Highlands, and he spoke romantically of it, so I had that thought in my head. But I never really intended to do much with that thought. Then when we started to earn a little bit of money, there was an accountant who said, ‘You should use the money for something - you should buy something with it’. Whereas we’d always thought you just stick it the bank. He said, ‘No, you’ve got to invest it, you got to do something’. So, I said OK, and he came up with this property that was for sale in Argyle near Campbeltown. He said it would be a great investment. I wasn’t sure I wanted to go up – I’d just got down to London from Liverpool, I wasn’t sure I want to go off to Scotland! Anyway, I was persuaded, and I went up there and thought it was okay, but I never thought of it as romantic until I met Linda. She said, ‘Could we go up there?’ And then with Linda, and with raising the family there, I saw things I’d never seen before in the countryside and scenery. It became really special.

PM.com: You mention in The Lyrics that the farm gave you the opportunity to be a ‘man’, a grown up; someone who fixes things, paints the roof, builds a table, helps run the farm. Did that time in Scotland in the late 1960s and early 1970s – where there was no one else around to help except the shepherd – give you an opportunity to grow as a person?

Paul: That’s a very good question and I don’t know. It was nice because it afforded us an escape from the London business scene, and what we were going through which was getting ugly. And the nice thing was that while I’d liked the idea of being ‘a man’, I was never any good at anything - so I had to learn. I would make a table, a little stool or something, and use old wood and just cobble it all together until one of my cousins, who was a builder, said, ‘You should get some new wood’. Wow - a lightbulb moment! So, I started getting better at it and eventually I did make a table - a proper kitchen table - and got better at all these little skills, like chopping wood, driving a tractor and so on.

Later on, when I started living on a farm down south, I would make trails in the woods for us to horse ride - taking an axe or a chainsaw out and making a path, and then in the next week it’d be completed, and we could ride through it on our horses. Those kinds of things were satisfying in a completely different way to anything I’d been used to. I’d been a city boy!

PM.com: Do you think it allowed you to develop as a person in a different way than may have happened if The Beatles had stayed together?

Paul: Yeah absolutely - very much. I would never have had time make a table! In the beginning when I was just a kid in Liverpool I could spend a bit of time in the nearby countryside - just in school holidays and on weekends. Then once The Beatles took off there was no time for anything but The Beatles.

Nowadays, I have periods where I do get a bit of time off, at least at the weekends, so I can do that kind of thing, but the minute I go on tour I can’t. Nancy and I make up for it, because if we go somewhere like Australia then we will get bikes and ride around, see the parakeets in the trees in the morning before the show or find a park or riverside. You get to identify with the place you’re in a little bit more. I think that’s a very good balance, which is certainly needed on tour. Otherwise it’s just tour, tour, tour! It’s nice to take a deep breath and go, ‘Hey - we’re in Sydney!’

PM.com: It’s the 50th anniversary of the Wings debut album Wild Life next month. With the band coming together while you were in Scotland, do you think that location had any kind of formative influence on the band and how you sounded?

Paul: I think Wild Life was just songs we wanted to do, although in some respects there’s the connection to animals, which actually came after a visit to a Kenyan safari park where there was a big sign that said, ‘The animals have the right of way’, and that really impressed me! I suppose I’ve always had that love of nature in me, but in Scotland it became more obvious.

So, Wild Life wasn’t specifically influenced by Scotland but RAM was. RAM was very much influenced by our experiences on the farm – animal experiences and nature experiences. I remember bringing in a baby lamb that had been out in the field in winter and was going to freeze to death and we helped it out. And I’d never seen a curlew landing before - a curlew is a bird with a long beak, and as it comes in it lands and it’s got this lovely sound. To see those kinds of things in the wild is nice, for someone like me, and that country atmosphere lent itself to writing songs.

PM.com: You mention in The Lyrics that when you were growing up you would go walking with your copy of The Observer’s Book of Birds into the countryside for ‘a little bit of solitude’ and to bird watch. Was part of the attraction of living on the farm that you were able to rekindle your love of bird watching and being in nature?

Paul: Birdwatching started in Liverpool - my mum had the midwife’s house on the edge of Liverpool, where we lived. It was where Liverpool just stopped and then became deep countryside, so that was when I had the opportunity to do quite a bit of birdwatching. And now because I live part time on a farm, I’m able to see a lot of birds and I don’t need the book quite so much as I did. There’s loads I don’t know, but I can identify a buzzard, which I saw over the weekend!

Well, you heard it here first: the countryside is cool! And fairly rock’n’roll too, as the inspiration for some of our favourite songs. Thanks for the question, Ali!

The Lyrics: 1956 to the Present by Paul McCartney is out now. Get your copy here!

You can also find out more about Paul’s writing process and how The Lyrics came together in last month’s ‘You Gave Me The Answer’ Q&A.