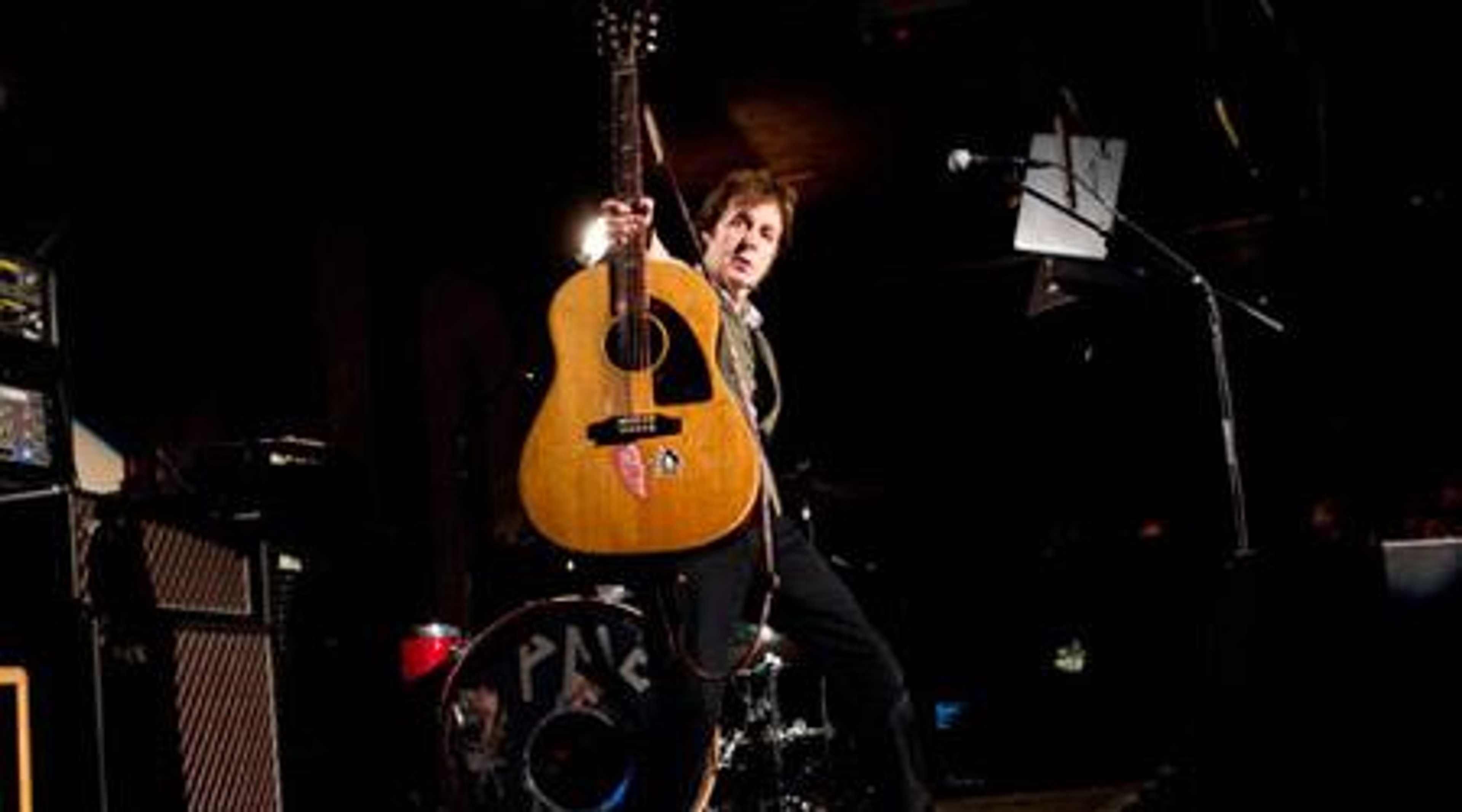 PM.com grabbed an exclusive interview with Paul backstage after the 100 Club show yesterday in London. You can listen to the full interview here:

Congratulations on a great show, how did it feel to play the 100 Club?

It felt fantastic you, know because we‚ are going back to the roots, reminded me of the cavern and beyond, and it was really nice. It‚ a great little venue and you know so we were happy to be part of the campaign to save it as a venue cos it's too good to lose, it's a great little central London venue. We had a great time. It's great playing those little clubs and the audience is so up close I mean forget it, it's like you're having dinner with them. But it was great it was really cool and we enjoyed it we felt we played good, and we felt the audience responded well so outside of the fact that it was an hour after I'd got out of bed, it was great we had fun.

So you could fill pretty much any stadium, any arena you wanted to, so why the club gig?

You know I mean it's nice playing the big stadiums because everyone who wants to see you can get in and it's good doing the big epic shows, but coming back down to a little club like that is exciting and really I think the thing was having played a lot of big epic stadium shows this year we wanted to kind of bring the whole thing back home to Great Britain and have a great time in great Britain. So we've come back to the 100 club and that's about as small as you can get, and it's very intimate very good fun and we had a blast I mean I haven't played a lunchtime show since the Cavern, and the whole idea of getting out of bed and trying to get yourself ready for a show where you're going to have to sing some very high notes is interesting and we had a great time.

And that was your smallest solo show ever apparently?

I would think it probably is yeah I think the cavern held more than the 100 Club, but it's great, those little places are great I think we all enjoyed it in the band.

So do you think we'll see a club tour next year?

Ok fair enough. It's been an amazing live year for you obviously you've got a couple of gigs to go you're finish in Liverpool is that a conscious choice? Are you looking forward to going back there?

Yeah you know it's interesting cause the 100 Club and the Academy O2 in Liverpool are two gigs my son James did this year so he did the reccy and you know we're following him into those gigs, but it's great I mean I love going back to Liverpool of course cos it's my home town I've got a load of relatives there and after we've been to Brazil and Argentina and American and been all over the place it's nice to come back home and so you know we come back to Liverpool and it's just a good feeling at the end of the year to bring the whole thing home feel like you're going full circle, and so I'm looking forward, the band are all looking forward to getting up to Liverpool and getting up north man c'mon.

Could you pick one live moment of the year as a stand out highlight? It has been an incredible year‚

It has been an incredible year, I think you've got, I would pick two. I think Sao Paulo, 65,000 people the first show was amazing the Brazilian people love their music and so we love to play to them and it was a stand out show. It was one of our top shows ever, and it was just brilliant, the audience was bananas and we have a great evening. And then I think you know you come down to the East room in the White House, smaller but just as great because of the Obamas' and the guests who were on the show so we had a great evening there too so I would choose those two.

Are you saying the White House was your warm up for today?

The White House was not a warm up

Uh no I'm not going, accepting that bait, y'know the White House was brilliant in it's own way I'd never played there, I'd never met an incumbent President and I'm big fan of this President and his wife and his family so we all were actually very buzzed to play that place and everyone involved in that show, it was something we were talking about for a good couple of weeks afterwards so it was great, it was not quite a warm up for the 100 Club, but it was fantastic

Brilliant, thanks a lot.

"If slaughterhouses had glass walls, everyone would be vegetarian."