UPDATED: Pre-Sale Ticket Links / Paul Is Getting 'Out There!' In Brazil! 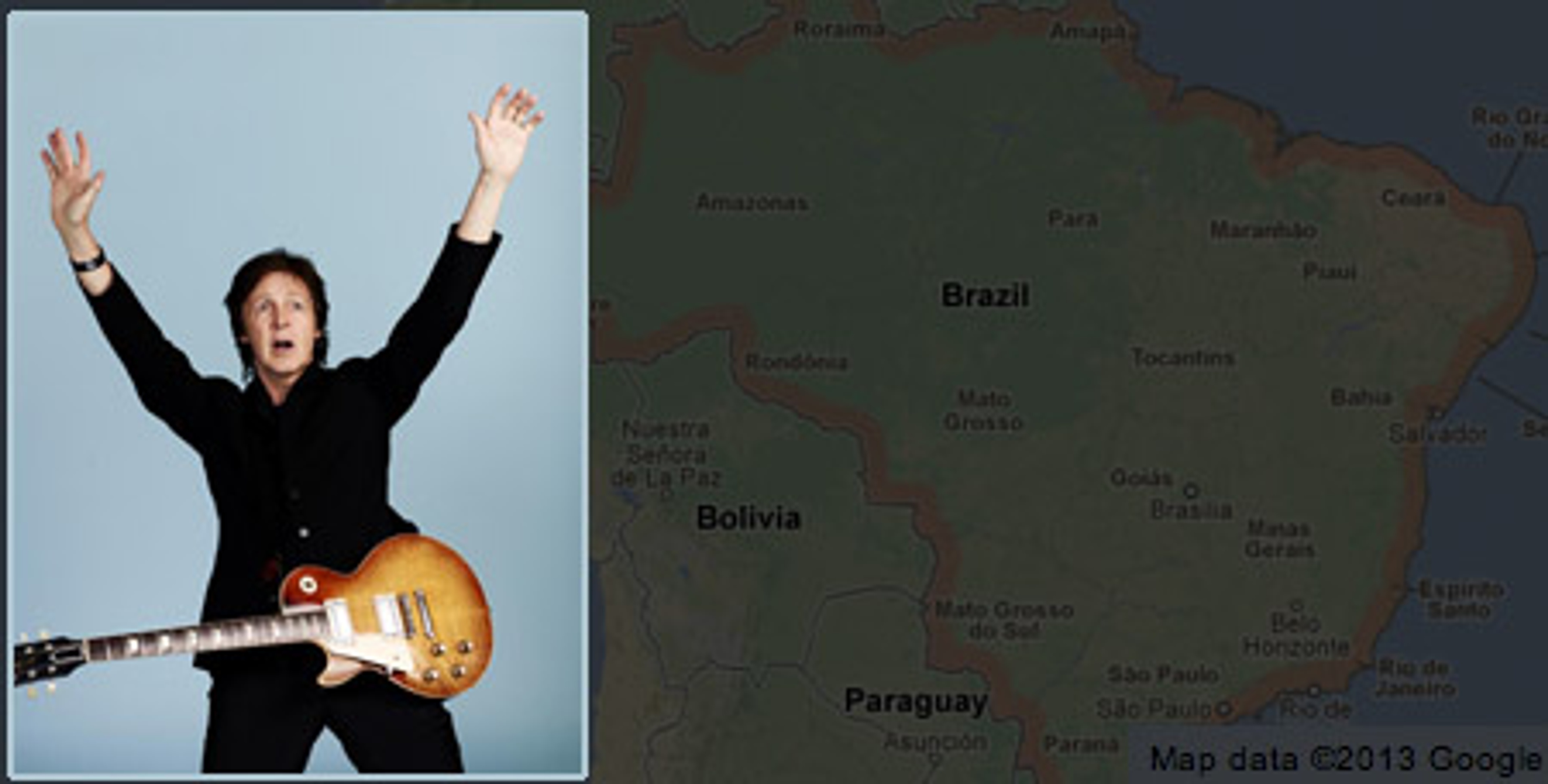 To purchase pre-sale tickets fans should come to PaulMcCartney.com where they will be asked to enter their email address. Registered fans will then be given exclusive access to purchase tickets. Please note: Pre-sale tickets are limited and sold on a first-come, first-serve basis.

Fans are advised to check local press for details of general on sale outlets.

Last week Paul McCartney announced his first live dates of 2013 as part of an all new tour called ‘Out There!’, which will see Paul and his band travel the world throughout the year, even visiting some places they've never been before.

Following the announcements that music's leading man will play at Warsaw’s National Stadium (his first ever show in Poland), Verona's Roman Ampitheatre and Vienna’s Happel Stadium this June, today it is announced that in May he will take the tour to Brazil.  He will be playing in Belo Horizonte, Goiania and Fortaleza - his first time playing in all three cities.

Paul will very much be looking forward to returning to Brazil after the warm welcome he has received there in recent years on his ‘Up and Coming’ and ‘On The Run’ tours, where fans lined the streets and Macca mania was in full effect.

The 'Out There!' tour will feature music from one of the best loved catalogues in popular music. Paul will perform songs that span his entire career - as a solo artist, member of Wings and of course as a Beatle.

The McCartney live experience is a once in a lifetime opportunity; in just three hours some of the greatest moments in music from the last 50 years are relived and for many have become the soundtrack to living. Last year marked 40 years since Paul's premier tour as a solo artist and these past four decades have seen him play in a staggeringly impressive range of venues and locations, including outside the Coliseum in Rome, in Moscow’s Red Square, at the White House, a free show in Mexico to over 400,000 people and even into Space!  Having played with his band - Paul ‘Wix’ Wickens (keyboards), Brian Ray (bass guitar/guitar), Rusty Anderson (guitar) and Abe Laboriel Jr. (drums) - for over ten years, the show never disappoints.

Paul is throwing himself into 2013 with full force following on from yet another landmark year in 2012, which saw him conclude his record-breaking ‘On The Run’ tour, release his chart topping 'Kisses On The Bottom' album, gain a star on the Hollywood Walk of Fame, play at both the Diamond Jubilee and Olympics Opening Ceremony and be named MusiCares Person of the Year, to highlight just a few memorable moments. With the 'Out There!' tour and a new studio album in the works, it looks like 2013 shows no signs of Paul slowing down.

Further announcements and dates will be added in the coming weeks so remember to keep checking back to PaulMcCartney.com...

UPDATED: TICKETS ON SALE NOW! Paul McCartney Is Getting 'Out There!'

UPDATED: TICKETS ON SALE NOW! Vienna Date Added to 'Out There!' Tour