You Gave Me The Answer - Life on the ‘GOT BACK’ Tour 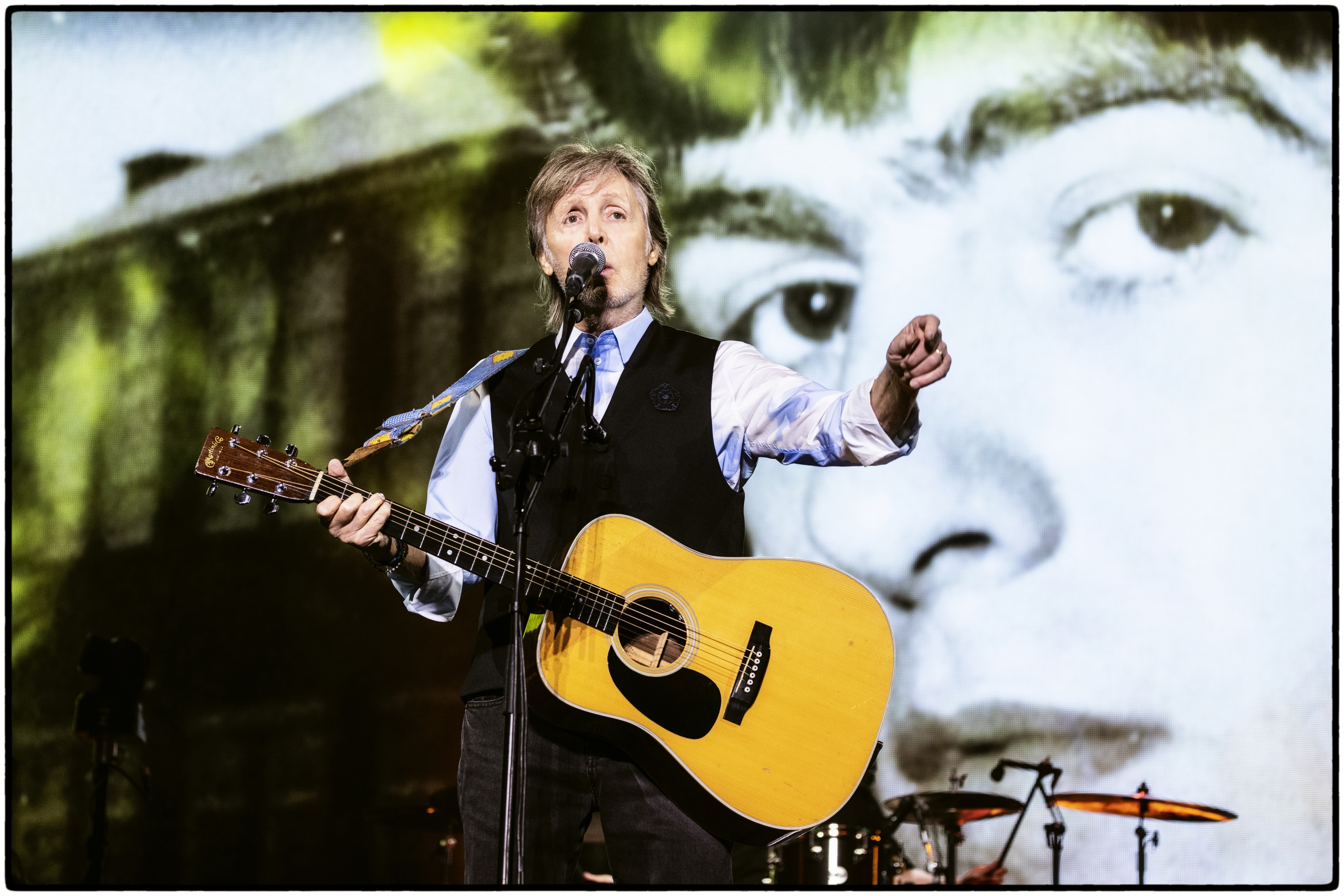 There’s nothing quite like the atmosphere at a Paul McCartney show.

⁠If our maths (helped by the new PaulMcCartney.com Timeline feature) is correct, GOT BACK is Paul’s 15th tour as a solo artist, and his 500th gig with the touring band of Rusty Anderson, Abe Laboriel Jr., Paul “Wix” Wickens and Brian Ray will be at Glastonbury. Not a bad way to celebrate such an impressive milestone! It’s safe to assume, then, that Paul feels right at home on that stage!

Anyone who has been to one of Paul’s shows will know that it is well-rehearsed and rousing, full of sing-along moments and pyrotechnic spectacle. And it’s no mean feat putting it all together: the crew work like a well-oiled machine, from ticketing agents to guitar techs, carpenters to caterers to security… the list goes on! Which got us wondering – where does Paul fit in with all these backstage roles and routines? In all his years of touring, has he always done the same thing before each show?

Earlier this month the PaulMcCartney.com team were lucky enough to join the touring family on the road in California, so we got a first-hand look at how the shows come together (more on that later...). Somewhere in the maze of rooms backstage at Oakland Arena, we sat down with Paul and found out more about his GOT BACK tour experience, so far…

PaulMcCartney.com: Are you enjoying being back out on the road, after such an unexpected break?

Paul: Yes! It’s always a bit of hard work trying to get back up to speed again, but the audiences make it so enjoyable that it doesn’t feel like work. So yeah, we’re all having a good time.

PM.com: Do you get nervous before a show?

Paul: Normally no, but when you come back after three years you get a bit more nervous than you normally would, because you’re just thinking, ‘Oh my gosh, have I forgotten how it goes?’ It takes a little while until you start to think, ‘Oh yeah, I’ve got this!’ and then your nerves go away.

PM.com: Do you have a pre-show routine or ritual?

Paul: Yeah, pretty much. I always get called an hour before the show - well, an hour before I’m going to be needed. In that time, I do certain things: I have a gargle with salt water, then I do my teeth, then I figure out what I’m going to wear, and then I have a kind of Chinese syrup solution you put hot water in. It’s supposed to be good for your throat - if you’ve ever seen pictures of me before the show with a cup, that’s what’s in it. It’s something Wix’s wife Margot told me about years ago.

After drinking that, I’ll sit down and get a bit of make-up done if I think I need it (which I always do!), just a little bit but filling in the cracks here and there. Then when I’m totally ready about fifteen or so minutes before the show, I get together with the band, and we do a little warm-up - a bit of ‘Let It Be’ and a little bit of ‘Hey Jude’. And then Phil our tour manager calls us, and we go to the side of the stage, all come together and do a little confidence boost huddle!

Right before I walk out, my guitar tech (who coincidentally is also called Phil) gives me my bass and my pick. We always slap hands - I try to slap his harder than he dares to slap mine, and these days of course he’s got rubber gloves on because of Covid precautions. Then we are called again, and that’s the final moment: we go on stage. So, it’s a long routine!

PM.com: What do you like best about playing shows in the US?

Paul: The good thing about the US is that it’s easy for the crew. The venues are prepared: the holes are all built so they can take a show like ours easily. Sometimes in Europe if you go to an older building you have to put extra stuff up to hang stuff from and so on, so my crew like American halls, as they can load into them easier.

I like playing in America because it’s English speaking, which makes things a little easier talking with the crowd. But I also really enjoy playing in foreign countries too because then I learn a little bit of the language and there’s another dimension to it, experiencing a different culture. But it just makes it easier when you can use slang and colloquialisms and you know they get it. So that’s a little bit of an advantage. And when you think about it, there aren’t that many English-speaking countries in the world: there’s the UK, US, Canada, Australia, New Zealand, South Africa… then you’re starting to run out. So yeah, the English-speaking thing makes it easy.

PM.com: If you’re not used to it as a Brit you do have to translate a little bit in America though - I got asked if I wanted my eggs over-easy yesterday and didn’t know what that meant!

Paul: It means turning them over – you get a fried egg, you turn it over and that’s over-easy! But yeah, I enjoy the language thing because I like languages, especially colloquialisms like
that.

Next time we come out to the States, we’ll bring our American / English dictionary… Thanks Paul! The GOT BACK tour will continue travelling through the US until its last stop on 16th June at the MetLife Stadium in East Rutherford – you can find all tour dates here.

If you’re going to one of the shows, text Paul on +1(212)313-9547 to join an exclusive community of fans and to get messages when Paul’s in your area. And don’t forget to keep checking PaulMcCartney.com for news and updates, as we set our eyes on Paul’s headline performance at Glastonbury Festival back in the UK on the 25th June. Not long to go now!

You Gave Me the Answer - Got Back Special