You Gave Me The Answer' - 'Wild Life' Special 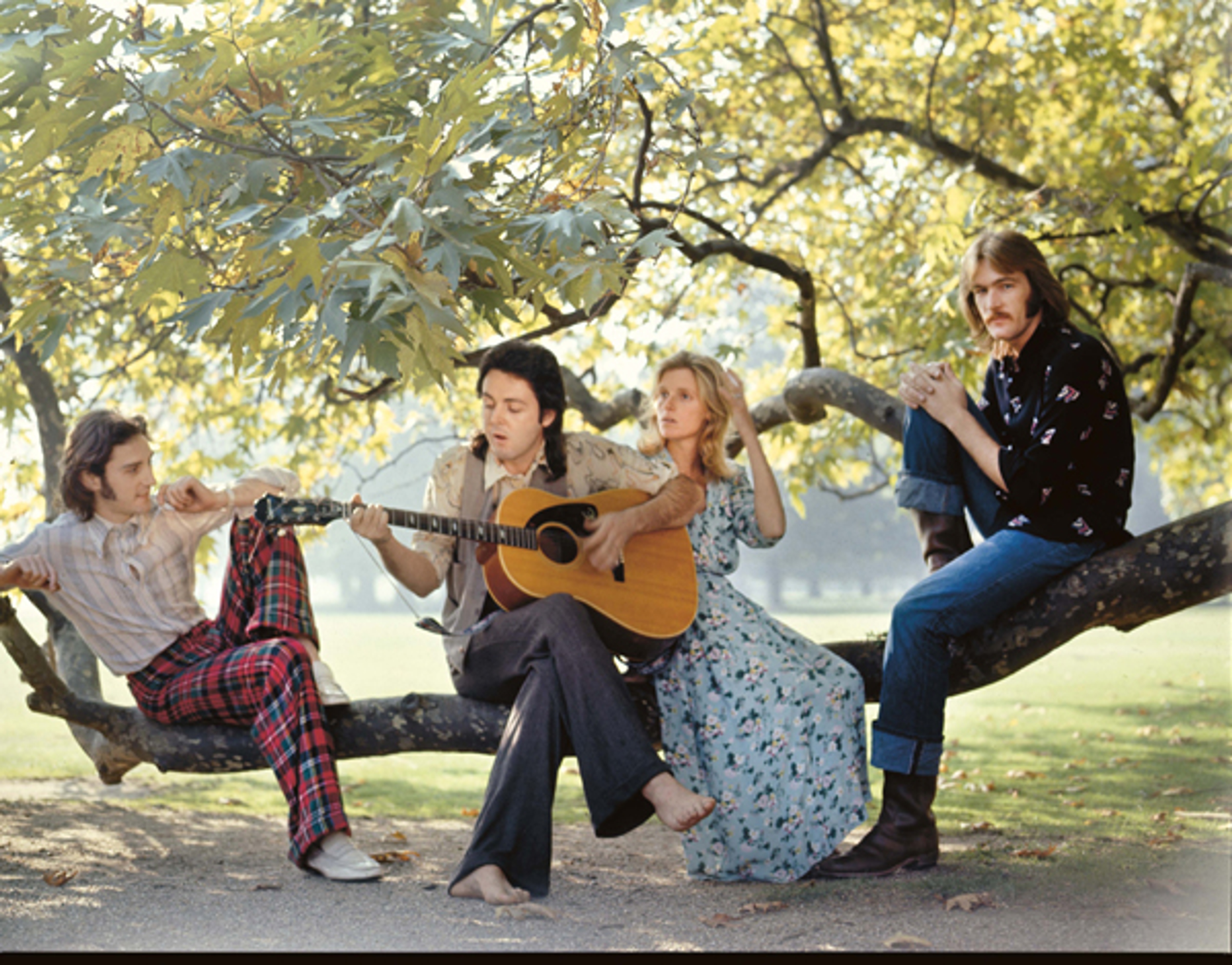 Fans will be aware that Paul likes to keep busy: if he’s not writing songs, he’s recording them; if he’s not recording, he’s touring; if he’s not touring, he’s writing books. This year, Paul has been doing all of these …and more!

In 2018, not only has Paul released Egypt Station - his first US number one album since Tug of War – he’s also started the brand new Freshen Up tour, written a new book Hey Grandude! and been preparing the latest releases in his GRAMMY-winning Archive Collection series. And it was for this last item that PaulMcCartney.com recently got to hang out with Paul as he was remastering Wild Life and Red Rose Speedway at Abbey Road Studios.

Remastering is an art unto itself. Back in the day, producers and engineers had to make sure that the music sounded as good as possible… on the technology available at that time. Fast forward a few years and what was once considered the best equipment, pails in comparison to what we now have available. So the audio engineers have to take the original analogue recordings, give them a bit of “spit and polish” and shine them up to sound like the artist would have heard them on the day of recording.

It’s always an honour to visit Abbey Road Studios - the birthplace of so many of our favourite albums – but doubly so to sit in on the remastering process and watch the magic taking place in front of you. Throw in the fact that Paul is sitting at the desk overseeing it himself and you’re in music heaven!

During the remastering sessions, Paul graciously took time out to talk about the recording of Wild Life and Red Rose Speedway. In this special edition of ‘You Gave Me The Answer’, Paul talks us through Wild Life.

PM.com: What are your main memories from around the time of Wild Life being written and recorded?

Paul: Well, I wanted to make an album just like that! [Clicks his fingers.] And Bob Dylan had just done an album in a few days, kind of thing. So I thought, ‘Yeah,’ you know. ‘That’d be good. Give it a freshness.’ That was the approach for putting Wild Life together.

PM.com: And while you’ve been sitting here remastering the album, are there songs that you’d forgotten about?

Paul: Yeah, absolutely! Well, to tell you the truth, I don’t listen to my old albums much, you know. I just don’t. So, I mean, to me it’s very strange that I would dare to do a track like ‘Mumbo’. To open an album with a track that hasn’t got any lyrics! It’s like, ‘Whoah!’ I mean, I think it’s kind of cool now. Like, ‘Wow, okay…!’

PM.com: It’s a very spontaneous way of making music – just getting in a room and playing.

Paul: Yeah. And, you know, this was following The Beatles. I’m not trying very hard, you know! [Jokingly sings the opening line of ‘Mumbo’, ‘Welllllllllllllllll….!!!’]

PM.com: Do you think that’s because you hadn’t been together very long as a band and were still finding your feet?

Paul: No, we still had songs and things. It was just a kind of rebellious attitude that maybe it’s time to be a bit experimental and try some new ideas. So this is just, you know, a romp. Just a rocking, romping thing. It was really a jam. It started as a jam and then we put the various little guitar riffs over it and made it a little bit more into a track. But I think that’s one of the sort of first things that came to mind. And then followed it up with ‘Bip Bop’, another little thing that’s not really got a lot of lyrical strength!

PM.com: You mentioned while you were remastering the track that you were perhaps a little embarrassed by the lyrics?

Paul: Well, definitely ‘Bip Bop’, I was, yeah. I mean, you know, we didn’t get good reviews for this because I think people were expecting something more sort of Beatle-like and I was purposefully digging my heels in saying, ‘We’re not gonna do that’. Just like an imitation of The Beatles. I didn’t feel like that was a good way to go.

PM.com: So the direction is quite deliberate – you wanted to do something different to what music fans and critics would expect from a Beatle?

Paul: Yes. You know, let’s just do what we want. It was important to do that. But I probably should have realised that critics and people looking at it would go, ‘Well, that’s not as good as what he used to do with The Beatles!’

PM.com: Did you and the band take any notice of the reviews?

Paul: I now like that we did this. I like this because, you know, I’ve always said we could have put some very professional group together and gone and done things very much like The Beatles, and just sort of carried on. But I didn’t want to do that. I wanted to try and relearn what it is to be in a band. So yeah, we just kind of threw it together. And then the decision to have Linda in the band singing was a really tough one, because she’s never sung professionally. She’d just sung at school in the Glee Club and around the house, sort of thing. But it was: whatever we do, we’re not going to do what The Beatles did… Well, we followed what the early Beatles did which was form a band of people who couldn’t play very well, couldn’t write very well, and just do it a lot until it gets good!

PM.com: So the idea behind the University Tour [Wings drove around the UK turning up unannounced at universities and offering to play] – was that your way of getting to play shows, not so much in the public eye, and where you could see how the band works live?

Paul: Yeah, although it was in the public eye! It was the nearest we could get to playing real and live, but not in a cupboard somewhere. You know, actually getting out and playing for people. And it was great, it was a great experience. A fun experience. And it’s nice to occasionally meet these people who were at those universities! They say, ‘I was there!’ I ask, ‘What was it like?’ ‘Freaky!’ It was a lunchtime gig. It was great!

PM.com: As we understand the story, you started off on guitar with The Beatles and then when Stuart Sutcliffe left you went onto bass because neither John nor George would. When you started Wings is there any reason why you stayed on bass and didn’t move back on to guitar?

Paul: Well, by then I was a bass player pretty much, who also happened to play guitar. I also think of myself as a bass player who plays piano - and also because I write on guitar and piano. But when I’m in the band I figure, you know: I’m the bass player!

[Side note: Anyone who’s heard the guitar solo in ‘Maybe I’m Amazed’ or seen Paul in concert will no doubt agree with us that he is every bit the great guitar and piano player ...but we decided not to argue this point!]

PM.com: Listening back to the Wild Life record today, what’s your impression of it?

Paul: ‘Love Is Strange’, that was a great song that Linda and I both knew and loved.

I mentioned earlier about ‘Mumbo’ being quite experimental, especially to finish off the record with the shorter “link” version. I think that song came from, you know, the band would just get an idea of a chord, or something. We’d just jam on it. And, it would be just, ‘Okay, this is in F’, or whatever key it’s in. And we’d just play. And I’d sort of shout stuff over the top. It’s all part of becoming a band. You know, you learn that I’m gonna be goofy and sing some goofy things, and you - for example - as the drummer have got to come along with it and do your own thing. And Denny Seiwell, I think, is really brilliant on all this stuff.

‘Wild Life’ was to do with me having gone on safari and actually seeing that sign that I sing about: ‘The animals have the right of way’. Which really impressed me. You just realise the sort of dignity and strength of wild animals because here they’ve got the right of way. Whereas we’re all so full of our own importance. It’s kind of nice, you know. You’re just a guy in a Land Rover. You don’t matter so much! So that was why I wrote that song. Man, you know, we’re the “top species”, and yet we’re the ones who eff it up, which is not right.

On things like ‘I Am Your Singer’ - and, well all of them – I really love Linda’s voice. I think it’s very distinctive and she sings well. I’m sort of listening for it being what the critics said - you know, ‘Oh, she’s not very good’. But her tone is great.

[Another side note: Paul isn’t the only musician to compliment Linda’s tone. Michael Jackson and Elton John have both been impressed by Linda’s singing on releases such as RAM and _Band on the Run._]

And then with ‘Dear Friend’, that’s sort of me talking to John after we’d had all the sort of disputes about The Beatles break up. I find it very emotional when I listen to it now. I have to sort of choke it back. I’m not going to cry in front of all you lot though! [Paul gestures to the five of us in the room sitting on the edge of our seats, captivated by the story!] But, for me, it is a bit like that. I remember when I heard the song recently, listening to the roughs [remastering works-in-progress] in the car. And I thought, ‘Oh God’. That lyric: ‘Really truly, young and newly wed’. Listening to that was like, ‘Oh my God, it’s true!’ I’m trying to say to John, ‘Look, you know, it’s all cool. Have a glass of wine. Let’s be cool.’ And luckily we did get it back together, which was like a great source of joy because it would have been terrible if he’d been killed as things were at that point and I’d never got to straighten it out with him. This was me reaching out. So, I think it’s very powerful in some very simple way. But it was certainly heartfelt.

What are your favourite songs on Wild Life? Let us know in the comments below! And remember to check back next month as Paul talks us through Red Rose Speedway!